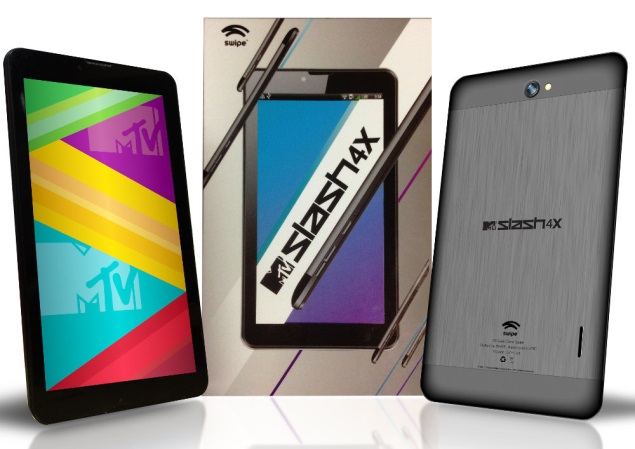 Swipe, continuing its partnership with MTV, has launched the MTV Slash 4X tablet for the Indian market, at Rs. 9,999.

The tablet is powered by a 1.3GHz quad-core processor (unspecified chipset) along with 1GB of RAM. It comes with 4GB inbuilt storage which is further expandable up to 32GB via microSD card. The Swipe MTV Slash 4X tablet sports a 2-megapixel rear camera with flash and also includes a 0.3-megapixel front-facing camera. Connectivity options on the tablet include Bluetooth, Wi-Fi, GPS, Micro-USB and 3G (via SIM). The tablet packs a 3,000mAh battery.

The MTV Slash 4X tablet also comes preloaded with apps like MTV India, which gives you exclusive access to all the MTV Shows; MTV Funny, which offers funny pictures, trolls and memes from the Internet, and MTV Hottie, which provides a peek into the MTV Splitsvilla contestants across five seasons.

Commenting on the launch, Shripal Gandhi, founder and CEO of Swipe Telecom said, "The MTV Slash 4X was the next logical step after the brilliant performance of MTV Slash. Our successful partnership with MTV that has helped us cater to the youth audience gives us the confidence that MTV Slash 4X will find many takers. We, at Swipe Telecom, are really excited about our latest innovative offering into the market. This product will set a benchmark in the category due to its brilliant performance which is also priced modestly. We at Swipe look forward to strengthening our Tablet PC portfolio and reach out to the youth audience with MTV."

Researchers develop energy-dense, biodegradable battery that runs on sugar
India and South Korea to collaborate on Internet of Things technologies