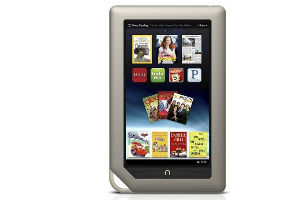 Highlights
Tablets and e-readers were a popular gift over the holidays, so much so that the number of people who own them nearly doubled between mid-December and January, a new study finds.

A report from the Pew Internet and American Life Project set to be released Monday found that 29 percent of Americans owned at least one tablet or e-reader as of the beginning of this month. That's up from 18 percent who said the same in December.

The iPad from Apple Inc. is perhaps the best-known example of these gadgets, along with Amazon.com's various Kindle devices and the Nook from Barnes and Noble. The iPad put tablets on the map and the cheaper Kindle Fire and Nook devices helped get them in the hands of more people.

The percentage of people who own a tablet jumped to 19 from 10 between mid-December and early January. E-book reader ownership also rose to 19 percent from 10 percent of U.S. adults.