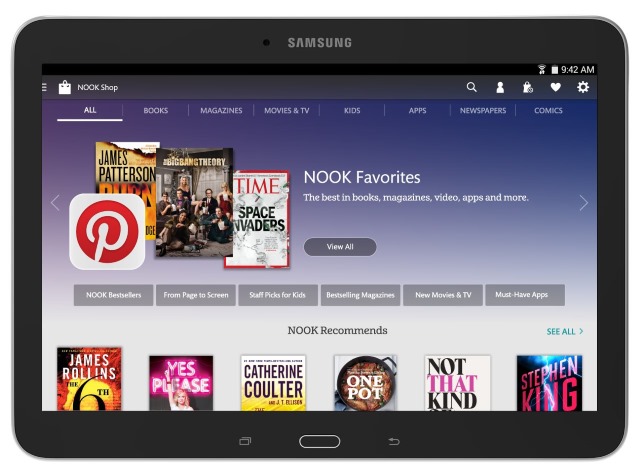 Samsung and Barnes & Noble said in June they would team up on the devices and the first-co branded Galaxy Tab 4 Nook debuted in August for $179 (approximately Rs. 11,000) with a 7-inch screen.

Now, the company is offering the tablet with a larger 10.1-inch diagonal screen ahead of the all-important holiday season for $299.99 (approximately Rs. 18,300). The tablets are competing in a crowded field that includes Apple's iPad and Amazon.com's Kindle Fire, both available in more than one size.

The Nook offers access to both the Nook app store and Google's Play store for Android apps. The new Nook will come with more than $200 (approximately Rs. 12,000) in free content from the NOOK Store, including a books, TV shows, top magazines and apps.

Both sizes of the Nook are available at Barnes & Noble retail stores and nook.com.

With the launch of the Galaxy Tab 4 Nook 7.0, the Nook for the first time got a camera. The 1.3 megapixel camera on the front is on par with what's on other tablets, but the 3.0 megapixel rear one isn't as sharp.

The Nook offers access to both the Nook app store and Google's Play store for Android apps - the latter unavailable in previous Nook tablets.

The New York company spent years investing in its Nook ebook reader and ebook library, but they struggled to be profitable. And in December the chain said it was evaluating the future of its tablets. Still it offered a new non-tablet ebook reader during the holiday season.