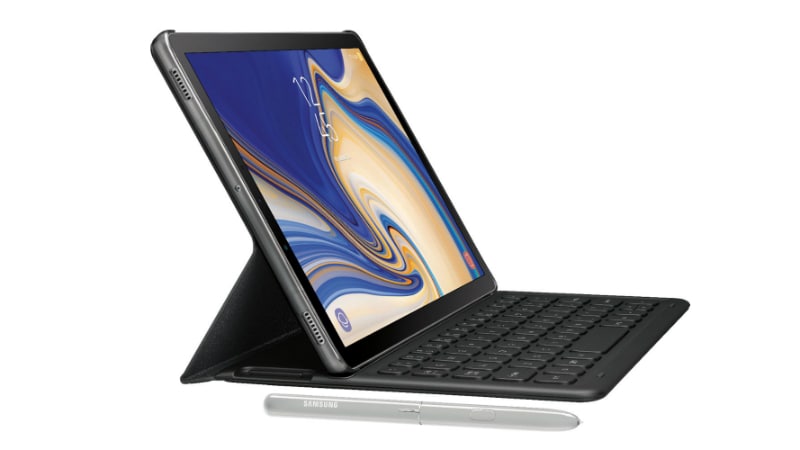 Samsung Galaxy Tab S4 has now surfaced online through a new render that shows its White colour version with an optional keyboard cover. The all-new S Pen for the latest Galaxy Tab model has also been leaked in a separate render comparing its aesthetics with the S Pen of last year's Galaxy Tab S3. The new renders emerge days after the design of the Galaxy Tab S4 got leaked online. The upcoming Galaxy Tab S4 was spotted on the US FCC website last month and is expected to debut alongside the Galaxy Note 9 and a new Samsung smartwatch, which could be called the Galaxy Watch, at the Galaxy Unpacked event on August 9.

If we look at a previously leaked render, Samsung has upgraded the design of the Galaxy Tab S4, though its back resembles the last year's model. There is AKG branding at the back to confirm that tablet will have speakers tuned by Samsung's AKG, similar to the Galaxy S9 family. Likewise, the front view of the tablet shows the absence of a home button. This suggests that the new model could include an under-display fingerprint scanner.

While Samsung hasn't made any confirmations on the existence of the Galaxy Tab S4, a recent listing on FCC has revealed its development. The FCC listing also detailed its specifications, including a 10.5-inch 2560x1600 pixels display and 2.3GHz octa-core Qualcomm processor along with Adreno 540 GPU and 4GB of RAM. The tablet is also found to have 64GB of onboard storage. Furthermore, some initial reports claimed that there will be a 12-megapixel rear camera, 7-megapixel front camera, Wi-Fi, GPS, and Bluetooth as well as Android 8.0 Oreo.