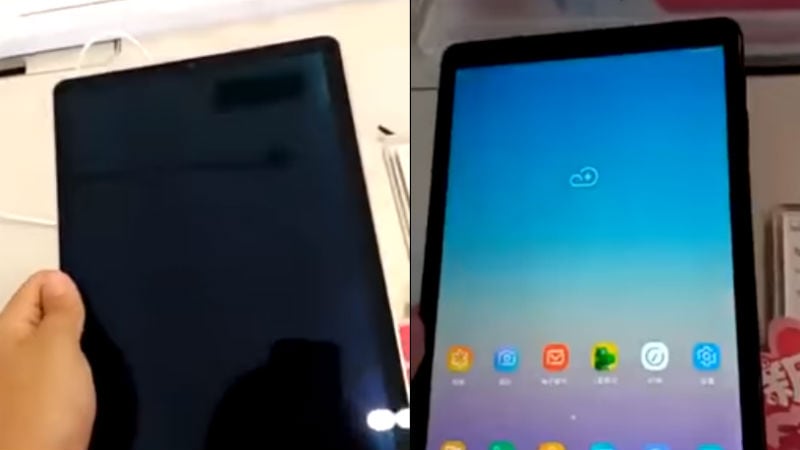 Samsung Galaxy Tab S4, the rumoured new tablet from Samsung, has now surfaced online through an alleged hands-on video that shows the tablet in all its glory. Samsung might unveil the tablet at IFA Berlin in September this year, or alongside the Galaxy Note 9 on August 9. While Galaxy Tab S4 has been a part of the rumour mill for a while, more leaks are surfacing online ahead of its launch. A short freshly leaked video has provided a look at the upcoming tablet from the front and back. Meanwhile, another report has claimed that the Galaxy Tab S4 will be able to provide DeX functionality even when there is no dock.

The Samsung Galaxy Tab S4 had previously been leaked through a render that showed its White colour variant with an optional keyboard cover. Now, a short video has surfaced on the internet that shows the Galaxy Tab S4 from both the sides. As per the video of the tablet, it will come in Black and Grey colour variants. In terms of specifications, the video does not provide any of the details. However, there have been a plethora of leaks earlier that give us an idea of what to expect from the Galaxy Tab S4.

Meanwhile, a report in AndroidGalaxys claims that the Galaxy Tab S4 will be able to connect to a monitor via its USB Type-C port for a DeX-kind of experience. A similar feature is expected to come with the Samsung Galaxy Note 9 as well. The Tab S4 will reportedly come with a Dual Mode that will allow you to use your Galaxy Note 9 or Galaxy Tab S4 as a connected screen in DeX mode.

Additionally, the S Pen that is expected to come with the Galaxy Tab S4 might also be used as a mouse or a pen for writing to drawing. Also, Linux on DeX could allow users to run one or more Linux distros in DeX mode. As per a WinFuture report, the Galaxy Tab S4 will be able to use DeX's desktop UI through the tablet's USB Type-C connection and a DisplayPort-enabled adapter, which may be a first from the company.

Coming to specifications, previous reports had claimed that the upcoming Samsung Galaxy Tab S4 is expected to run Android 8.1 Oreo, and sport a 10.5-inch Super AMOLED display with a 2560x1600 pixels resolution and 16:10 aspect ratio. The tablet will be powered by a Qualcomm Snapdragon 835 SoC, paired with 4GB of LPDDR4X RAM and 64GB of inbuilt storage. In terms of optics, the Galaxy Tab S4 might get a 13-megapixel rear-facing camera sensor and an 8-megapixel sensor on the front for selfies and video calling. There is expected to be a massive 7,300mAh battery under the hood. Connectivity options on the tablet include Wi-Fi 802.11ac, Bluetooth v5.0, GPS, and a USB 3.1 port. The report suggests that Samsung has decided to do away with a fingerprint sensor on the tablet and has replaced it with an iris scanner instead.