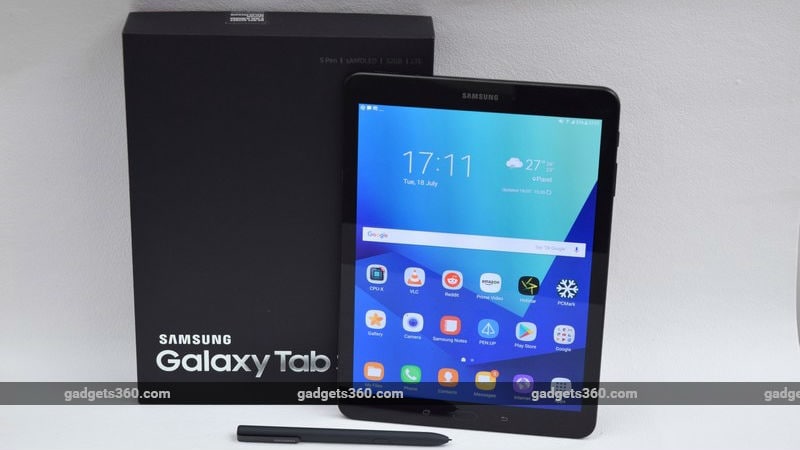 An alleged Samsung Galaxy Tab S4 device has surfaced on a benchmarking website ahead of its rumoured launch at Mobile World Congress (MWC 2018) next week. The newly spotted Samsung Galaxy device is being speculated to be the successor to the Galaxy Tab S3 that Samsung had unveiled at the same event, a year ago. The South Korean giant is set to unveil its latest flagship smartphones - Galaxy S9 and Galaxy S9+ - at MWC 2018, alongside which the Galaxy Tab S4 may also see an announcement.

The tabet carrying model number SM-T835 was spotted on benchmark website GFXBench revealing some key specifications of the tablet. A listing mentions a 10.5-inch 2560x1600 pixels screen and a 2.3GHz octa-core Qualcomm processor alongside Adreno 540 GPU (indicating the presence of Snapdragon 835 SoC). Also present, is 4GB of RAM and 64GB of inbuilt storage.

Other features leaked of the Samsung Galaxy Tab S4 include a 12-megapixel rear camera, a 7-megapixel selfie camera. The tablet will reportedly run Android 8.0 Oreo. Connectivity options will include Wi-Fi, GPS, and Bluetooth.

In comparison, the Samsung Galaxy Tab S3 featured a 9.7-inch QXGA (2048x1536 pixels) Super AMOLED display and powered by a Qualcomm Snapdragon 820 SoC coupled with 4GB of RAM. It was announced with a 13-megapixel rear camera with flash and 4K video recording, and a 5-megapixel front camera. It has 32GB of inbuilt storage that's expandable via microSD card (up to 256GB).