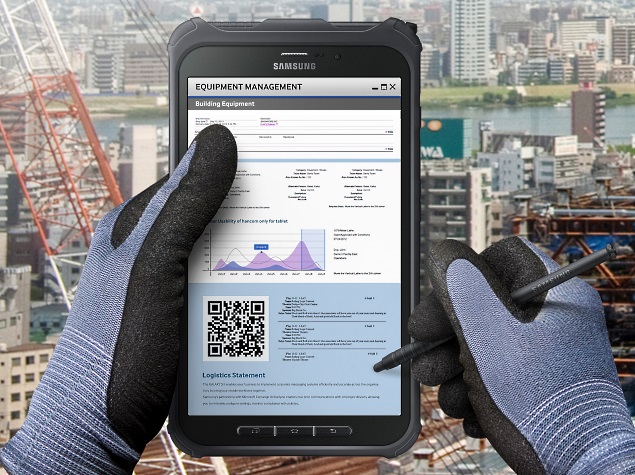 Samsung has announced the Galaxy Tab Active, its tablet offering for the enterprise market, will be headed to India soon. At the annual Samsung Forum event in Thailand on Monday, the company revealed a suggested retail price of around Rs. 52,000, without confirming the exact price and availability details. The company said the device will initially be available only via authorised B2B solutions partners.

The Samsung Galaxy Tab Active is dust and water-resistant with IP67 certification, and comes with an anti-shock covering, which according to Samsung, can withstand a 1.2 metre drop with the protective cover on.

The tablet boasts of a 3.1-megapixel autofocus rear camera with LED flash, and a 1.2-megapixel front-facing camera. The 16GB built-in storage on Galaxy Tab Active can be expanded via microSD card (up to 64GB).

Connectivity options on the Galaxy Tab Active include Wi-Fi, Bluetooth, GPS, Glonass, 3G and 4G LTE connectivity. Samsung says that the 4450mAh battery is user-replaceable. The device measures at 126.2x213.1x9.75mm and weighs 393 grams.

Samsung Galaxy Active's rugged cover comes with a slot to tuck in the S-Pen stylus, aimed at providing an alternate input method to professionals.

The Galaxy Tab Active will come in the Titanium Green colour and in two variants - Wi-Fi and LTE. Samsung is also offering its Knox security feature, along with optional three years extended warranty.

Disclosure: Samsung sponsored the correspondent's flights and hotel for the event in Bangkok.