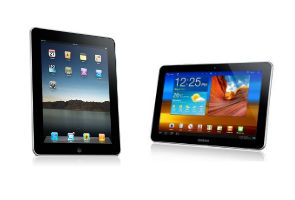 Highlights
Electronics giant Samsung on Monday said it would launch a counter claim against US firm Apple in Australia as part of a dispute between the rival companies over tablet computers.

The American company launched legal action against South Korea's Samsung Electronics in Sydney earlier this month, accusing it of infringing its patents with its Galaxy Tab 10.1 tablet.

Samsung said on Monday that it had agreed to delay the product's launch in Australia pending a decision by the Federal Court due in the week beginning September 26, but would defend the case.

"Samsung will continue to actively defend its right to launch the Samsung Galaxy Tab 10.1 in Australia in order to ensure that consumers have a wider selection of innovative products to choose from," it said in a statement.

Apple is seeking to permanently ban the sale or promotion of the latest Galaxy, which would compete with its iPad, in Australia, saying it infringes Apple patents.
Samsung disputes this.

The companies are already embroiled in a patent dispute over smartphones and tablet computers in the United States, with both sides filing infringement claims against the other.

Legal action is also ongoing in Germany and South Korea.

Samsung has so far released its touchscreen Galaxy Tab 10.1, which it says is the world's thinnest tablet at just 8.6 millimetres, in at least five overseas countries, including the United States.

It had planned to launch its modified version in Australia in mid-September.

"Samsung will continue to pursue all possible measures including legal action to defend its intellectual property rights and ensure its innovative products remain available to consumers throughout the world," it said.
Comments