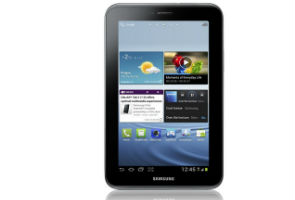 Highlights
Samsung has announced the Galaxy Tab 2 (7.0), a 7-inch tablet that will run on Google's latest OS, Ice Cream Sandwich (Android Version 4.0) overlaid with the Samsung's TouchWiz skin. Other specifications of the device includes a 1GHz Dual-Core processor, 1GB RAM, 3MP rear shooter, VGA front facing camera, Wi-Fi and HSPA+ connectivity at 21MBPS. The 7-inch display spots a resolution of 1024x600 and the device is powered by a 4000mAh battery.

With Google's ICS OS, users can expect to use a variety of new features such as Face unlock, wireless data monitoring without the use of third part apps, improved notifications, and Google's improved voice recognition. We also expect Samsung to unveil an upgrade to their TouchWiz skin, although there is no official confirmation of this yet. The device is expected to launch in the UK in March, but pricing and global release date is still unknown.
Comments