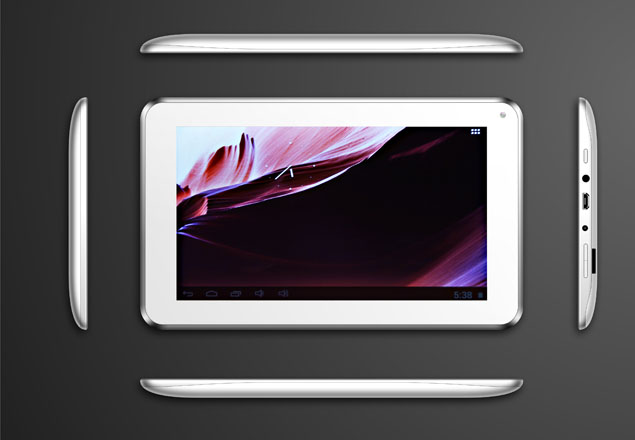 Salora International Ltd (SIL) has jumped into the tablet market with two new tablets - Salora Protab and Salora Protab HD. Salora Protab HD sports a 7-inch LCD multi-touch capacitive screen with 16 million colours and a resolution of 1024X600. The tablet is powered by ARM Cortex A9 1.2GHz processor along with Vivante GC800 GPU. The tablet carries a price of Rs. 5,499.

It runs on Android 4.1 (Jelly Bean). It comes with 1GB of RAM and 4GB of internal storage that can be expanded by up to 32GB via a microSD card. For camera, there is a 0.3-megapixel front camera. The tablet comes with 3,200mAh battery, which as per company's claim gives a batter backup of 4 to 5 hours of video playback time. Salora Protab HD also supports 3G dongle via USB. The tablet comes in creamy white colour. It is 9.9 mm thick and weighs about 290 grams.

Salora Protab on the other hand is powered by ARM Cortex A8 processor that clocks 1.5GHz. It is also a 7-inch tablet, but comes with an inferior resolution of 800X480. Salora Protab runs on Android 4.0.4 (Ice Cream Sandwich). The tablet comes with 512MB of RAM and 4GB of internal storage that is expandable up to 32 GB. This tablet also comes with a 0.3-megapixel front camera and 3200 mAh battery. It is priced at Rs. 4,999.

Speaking on the launch Gopal Kumar Jiwarajka, Chairman & Managing Director, Salora International Ltd, said "After a successful launch of the smart phone which got an exceptional review and response, we at Salora are excited to launch its power packed Tablet PC series called Salora Protab. Combining features such as an ultra-fast processor, long standing battery backup, high quality camera, pre embedded applications, impressively low weight and stylish appeal, Salora Protab will enthrall and cater the needs of tech savvy consumers today. With impressive specs the Protab is not only set to compete with leading brands in its category but will also provide consumers a stunner in a budget that won't lead to another EMI."