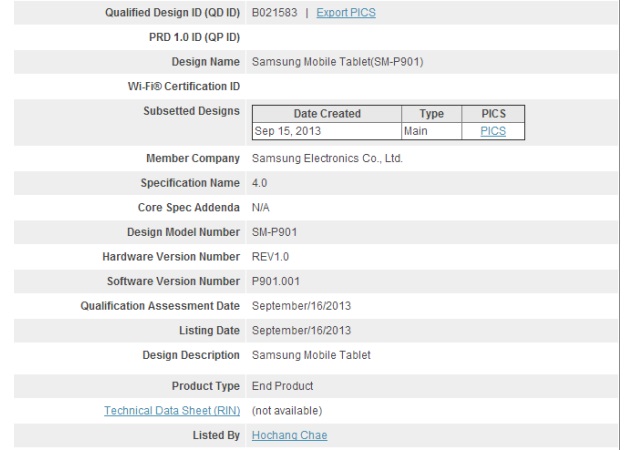 Samsung may not have officially announced the rumoured 12.2-inch Galaxy Note tablet, but recent leaks have once again pointed to its existence.

The Samsung's alleged tablet has been spotted at the Bluetooth certification forum with model number SM-P901 attached to it, which is quite close to its previous appearances. Earlier the tablet was rumoured to come with model number SM-P900, however, the newly spotted tablet at the Bluetooth SIG (Special Interest Group) filing might be a Wi-Fi or an LTE variant of the rumoured 12.2-inch Galaxy Note tablet. Unfortunately, the listing does not offer any new insight about the alleged 12.2-inch tablet from Samsung.

Android Headlines spotted the listing first and notes that the specifications of the rumoured Galaxy Note 12.2 tablet include a 2560x1600 pixels resolution display which is similar to the Galaxy Note 10.1 2014 Edition unveiled at the IFA earlier this month.

It was also reported that the South Korean major might release the 12.2-inch tablet in October.

Prior to this, popular tipster @evleaks had revealed the specification of Samsung SM-P900 which it claimed was the model number of tablet featuring a 12.2-inch display. As per the claims, the alleged 12.2-inch tablet will boast of a resolution of 2560x1600 pixels and would be powered by the Exynos Octa 5 chip. The SM-P900 will also supposedly support S Pen.