Rumoured HTC One tablet spotted in the wild 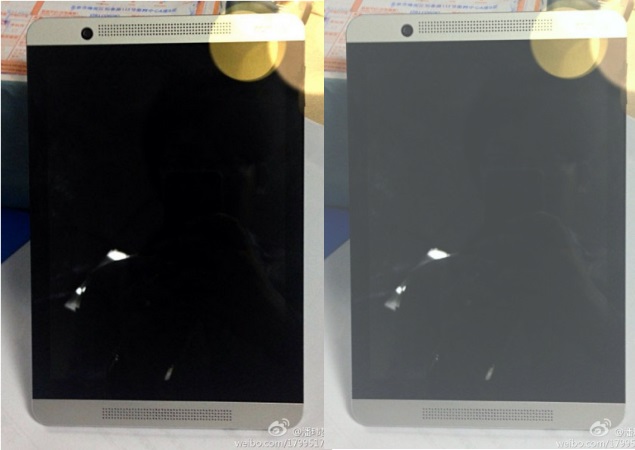 Images purportedly showing what is being called the HTC One tablet have appeared online, suggesting that the Taiwanese maker may be working on a tablet alongside its flagship phablet, the One Max.

The images in the Chinese media, first picked up by SIM Only Radar indicate that the display of the rumoured HTC One tablet can be between 8-inch to 10-inches. The image reveals that the alleged HTC One tablet will follow the same design lines as in HTC One. Little else is known about the mysterious tablet, except the rumoured size.

HTC has already launched variants of its flagship smartphone, the One, such as the HTC One mini, the Vivid Blue variant unveiled at the IFA, and is rumoured to be also working on a big-sized phablet, the One Max.

Earlier on Tuesday, reports that the HTC T6 will be officially dubbed the HTC One Max were doing the rounds, with phone tipster, @evleaks attributed. However, the @evleaks tweet did not mention anything about the possible launch dates of the long-rumoured HTC One Max.

The Taiwanese handset giant has been long rumoured to be working on a large screen smartphone which will boast a large 5.9-inch display.

If the rumour turns out to be true, the Taiwanese maker will join the tablet fray with the likes of Samsung's Galaxy Tab range, the Apple iPad and iPad mini series and even the Nexus 7 tablets. HTC launched, the Flyer which was an android based tablet back in 2011. However, the HTC Flyer never really took off in the market and forced the company to focus on its smartphone line-up.