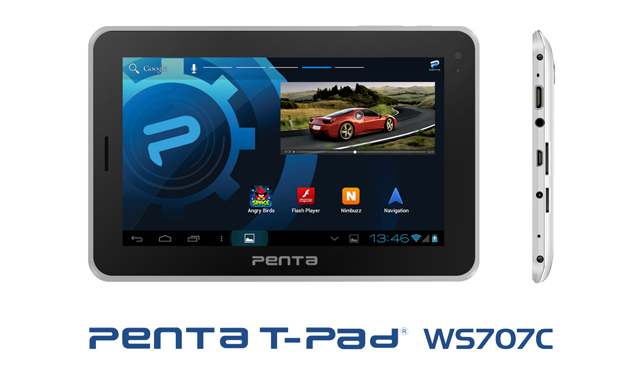 After offering many tablets in partnership with BSNL, Pantel Technologies has launched yet another tablet dubbed as the Penta T-Pad WS707C with built-in SIM card slot for voice calling and 2G connectivity. The device is priced at Rs.7,999.

Internally, the tablet is powered by a 1 GHz Cortex A9 processor with 1 GB DDR3 RAM and a Mali 400 GPU. It comes with 8GB of internal storage with additional support for upto 32GB via microSD.

The Penta T-Pad measures 10.5mm in thickness and weighs 340 grams. It boasts a 3,000mAh battery and comes pre-installed with a host of popular applications including Facebook, Skype (for video calling), NexGtv and more.

The device supports various connectivity options like WiFi 802.11b/g/n, 3G (via external dongle), 2G (via SIM card Slot), Bluetooth 2.1, USB OTG and HDMI. The company is also bundling in 3D goggles for viewing 3D content on the tablet along with a free pouch.

Speaking on the occasion, Mr. Vijender Singh, MD Pantel Technologies said "As a pioneer in the Tablet PC industry, Pantel Technologies is proud to introduce the power packed Penta T-Pad WS707C. Endowed with superior specifications, Penta T-Pad WS707C is an EDGE-enabled device which personifies performance with superior connectivity at an affordable price."