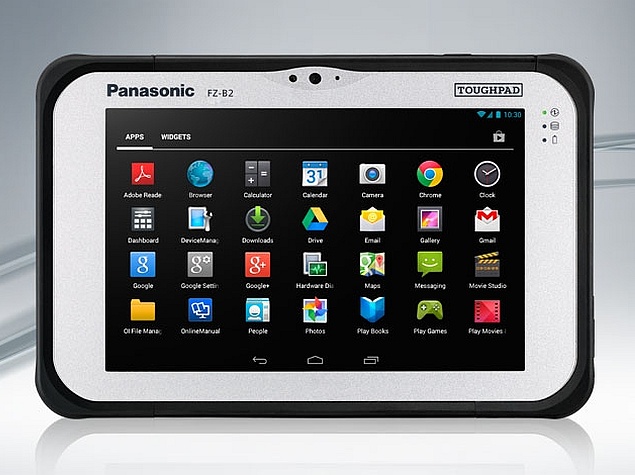 Panasonic has launched a new Android-powered rugged tablet under its Toughpad series, named Toughpad FZ-B2. Supposedly "designed for business", the Panasonic Toughpad FZ-B2 will hit the shelves in Europe starting December this year at GBP 709 (roughly Rs. 70,600), and in the US in February at $1,299 (roughly Rs. 80,000). Details of availability in other markets were not revealed.

The Panasonic FZ-B2 tablet, as per its listing on the main company website, features a 7-inch WXGA (800x1200 pixels) IPS LCD display and a fanless design, apart from running Android 4.4 KitKat out-of-the-box.

The FZ-B2 meets the MIL-STD-810G standard, features a IP65 rating for dust and water resistance, and has been drop-tested for a height of 180cm. The tablet bears 32GB of inbuilt storage (with a support for microSD card) and features a 5-megapixel rear camera (8-megapixel optional) and 2-megapixel front-facing snapper.

The connectivity options of the Panasonic FZ-B2 include Wi-Fi 802.11ac, Bluetooth 4.0 and USB 3.0. The tablet is 18mm thick and weighs 540 grams. The company also claims that the tablet can offer up to 8 hours of battery life with the user-replaceable 3220mAh battery. An optional 14-hour battery is also available.

Couple of weeks ago, Panasonic launched its budget T40 smartphone in India, priced at Rs. 5,990. Some of the key features of the Android 4.4.2 KitKat-based smartphone are a 4-inch (480x800 pixels) WVGA IPS display, a 1.3GHz quad-core processor, 1GB of RAM, 8GB of inbuilt storage further expandable via microSD card (up to 32GB), a 5-megapixel rear autofocus camera, a 2-megapixel front-facing camera, and a 1500mAh removable battery.

Indian Delivery Firms a Prize Investment as Billions Pour Into E-Commerce
Are Online Sales and Exclusive Tie-Ups Creating a Monopoly?