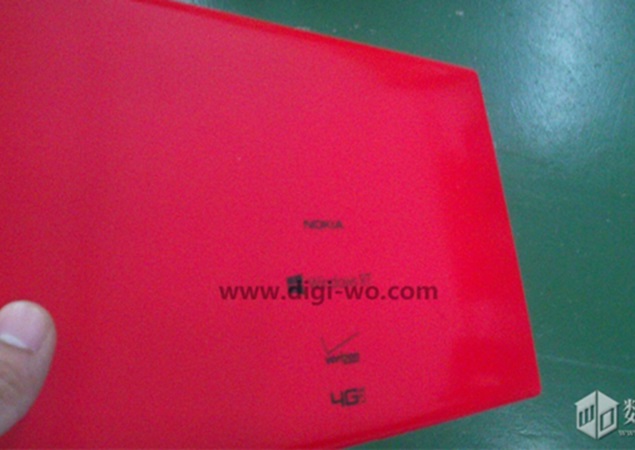 It has been rumoured for a while now that Nokia is working on a Windows RT tablet. Now some new images have surfaced online that show the tablet's rear panel.

The images first popped on a Chinese website, Digi-wo that revealed Nokia's branding in the middle of the rear panel of a Red tablet. Visible below that is a Windows RT label indicating that the tablet runs on Microsoft's Windows variant for ARM devices that has failed to gain any kind of traction so far. Verizon and 4G LTE branding is also visible on the tablet.

However, not much has been revealed at this point in time in terms of hardware specifications of the tablet.

The Verge claims that Nokia will unveil its tablet at a special launch event in New York next month. The site also suggests that the company has been courting developers for the event and it is tentatively scheduled for September 26th, very much in-line with the earlier reports.

The Verge also cites "sources familiar with Nokia's plan" to say that the tablet is codenamed Vanquish and features Qualcomm's quad-core Snapdragon 800 processor and Windows RT. It adds that the tablet will include LTE support and will be made available on AT&T in the US as well.

This is in line with the rumoured specifications that leaked earlier. This included a 10.1-inch display and a quad-core processor with Adreno 330 GPU.

It is interesting to note that Nokia believes the Windows RT platform has a future, after Microsoft itself failed to make a dent in the market with its Surface RT tablet, taking a $900 million charge for "inventory adjustments" for the tablet in its last quarterly earnings.