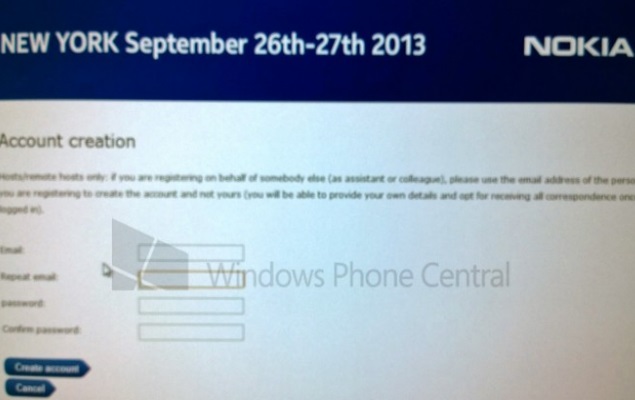 It looks like Nokia is gearing up to host an event in New York (US) in September.

Windows Phone focused website, WP Central, reports that it has learnt that the Finnish handset giant is hosting an event on September 26-27, in the Big Apple, though it's not clear if it's a public press event or an internal meet. The site has also posted a screenshot of what appears to be an online registration screen for the event.

While the company had earlier launched some of its flagship phones, including the recently released Nokia 1020, it's also possible that Nokia could unveil a Windows powered tablet, which it has been rumoured to be working on.

The site also claims it had received a description for the Nokia tablet that suggests a Nokia Lumia phones like design with "bright colours and rounded corners". The rumoured tablet is expected to feature an 11-inch display.

On Wednesday, Nokia's new Windows tablet was spotted in benchmark results. We reported that a device dubbed as RX-114 popped up on graphics processor benchmarking website GFXBench.

The benchmark results suggested that the alleged Nokia RX-114 tablet would be powered by a quad-core processor with Adreno 330 GPU graphics processor. The device is expected to run Windows RT.

However, not much has been revealed in terms of hardware specifications including RAM, internal storage, camera and battery at this point in time.

Earlier this month we also reported about Nokia's Windows RT tablet, which was apparently cancelled. Interestingly, pictures of the alleged tablet also appeared on the Internet.

A leaked purported picture of what appeared to be a 10-inch tablet running Windows RT was also revealed.