No words, no gestures, just your brain as the control pad 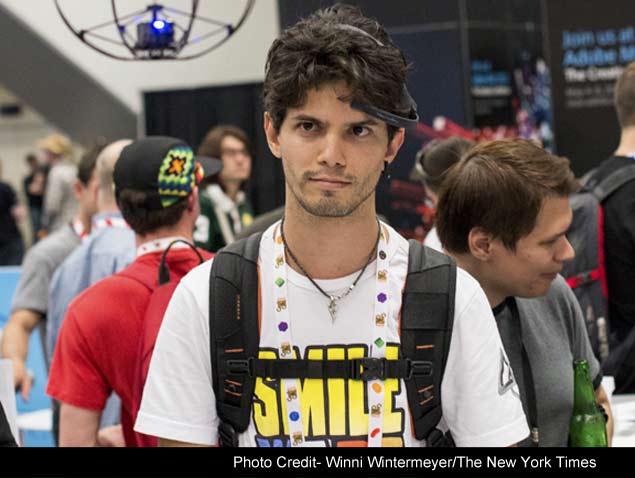 Last week, engineers sniffing around the programming code for Google Glass found hidden examples of ways that people might interact with the wearable computers without having to say a word. Among them, a user could nod to turn the glasses on or off. A single wink might tell the glasses to take a picture.

But don't expect these gestures to be necessary for long. Soon, we might interact with our smartphones and computers by using our minds. In a couple of years, we could be turning on the lights at home just by thinking about it, or sending an email from our smartphone without even pulling the device from our pocket. Farther into the future, your robot assistant will appear by your side with a glass of lemonade because it knows you're thirsty.

Researchers in Samsung's Emerging Technology Lab are testing tablets that can be controlled by your brain, using a cap that resembles a ski hat studded with monitoring electrodes, the MIT Technology Review, the science and technology journal of the Massachusetts Institute of Technology, reported this month.

The technology, often called a brain computer interface, was conceived to enable people with paralysis and other disabilities to interact with computers or control robotic arms, all by simply thinking about such actions. Before long, these technologies could well be in consumer electronics, too.

NeuroSky, a company based in San Jose, Calif., recently released a Bluetooth-enabled headset that can monitor slight changes in brain waves and allow people to play concentration-based games on computers and smartphones. These include a zombie-chasing game, archery and a game where you dodge bullets - all these apps use your mind as the joystick.

Another company, Emotiv, sells a headset that looks like a large alien hand and can read brain waves associated with thoughts, feelings and expressions. The device can be used to play Tetris-like games or search through Flickr photos by thinking about an emotion the person is feeling - like happy, or excited - rather than searching by keywords. Muse, a lightweight, wireless headband, can engage with an app that "exercises the brain" by forcing people to concentrate on aspects of a screen, almost like taking your mind to the gym.

Car manufacturers are exploring technologies packed into the back of the seat that detect when people fall asleep while driving and rattle the steering wheel to awaken them.

But the products commercially available today will soon look archaic. "The current brain technologies are like trying to listen to a conversation in a football stadium from a blimp," said John Donoghue, a neuroscientist and director of the Brown Institute for Brain Science. "To really be able to understand what is going on with the brain today you need to surgically implant an array of sensors into the brain." In other words, to gain access to the brain, for now you still need a chip in your head.

Last year, a project called BrainGate pioneered by Donoghue, enabled two people with full paralysis to use a robotic arm with a computer responding to their brain activity. One woman, who had not used her arms in 15 years, could grasp a bottle of coffee, serve herself a drink and then return the bottle to a table. All done by imagining the robotic arm's movements.

But that chip inside the head could soon vanish, as scientists say we are poised to gain a much greater understanding of the brain, and, in turn, technologies that empower brain computer interfaces. An initiative by the Obama administration this year called the Brain Activity Map project, a decadelong research project, aims to build a comprehensive map of the brain.

Miyoung Chun, a molecular biologist and vice president for science programs at the Kavli Foundation, is working on the project and although she said it would take a decade to completely map the brain, companies would be able to build new kinds of brain computer interface products within two years.

"The Brain Activity Map will give hardware companies a lot of new tools that will change how we use smartphones and tablets," Chun said. "It will revolutionize everything from robotic implants and neural prosthetics, to remote controls, which could be history in the foreseeable future when you can change your television channel by thinking about it."

There are some fears to be addressed. On the Muse website, an FAQ is devoted to convincing customers that the device cannot siphon thoughts from people's minds.

These brain-reading technologies have been the stuff of science fiction for decades.

In the 1982 movie "Firefox," Clint Eastwood plays a fighter pilot on a mission to the Soviet Union to steal a prototype fighter jet that can be controlled by a brain neurolink. But Eastwood has to think in Russian for the plane to work, and he almost dies when he cannot get the missiles to fire during a dogfight.

Although we won't be flying planes with our minds anytime soon, surfing the Web on our smartphones might be closer.

Donoghue of Brown said one of the current techniques used to read people's brains is called P300, in which a computer can determine which letter of the alphabet someone is thinking about based on the area of the brain that is activated when she sees a screen full of letters. But even when advances in brain-reading technologies speed up, there will be new challenges, as scientists will have to determine if the person wants to search the Web for something in particular, or if he is just thinking about a random topic.

"Just because I'm thinking about a steak medium-rare at a restaurant doesn't mean I actually want that for dinner," Donoghue said. "Just like Google glasses, which will have to know if you're blinking because there is something in your eye or if you actually want to take a picture," brain computer interfaces will need to know if you're just thinking about that steak or really want to order it.

Nokia launches Appcelerate-India in a bid to boost Lumia and Windows app development
Android 5.0 may have to wait as Android 4.3 Jelly Bean spotted in the wild