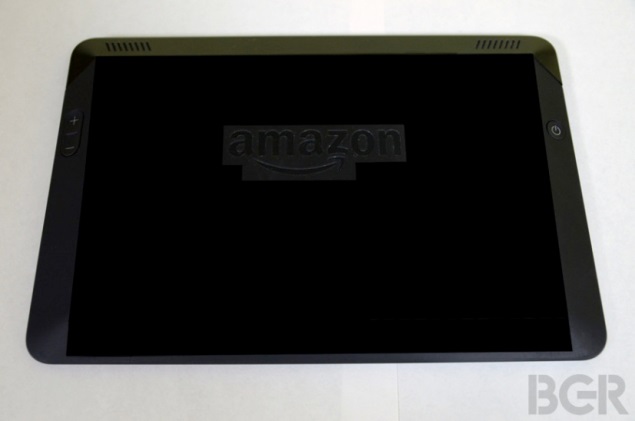 The next-generation of Amazon's Kindle Fire HD tablet seems to have been revealed with a fresh crop of leaked images.

If real, the leaked images reveal the refreshed Kindle Fire HD in its full glory, and showing a tablet with an angular design, featuring no physical buttons in the front, and revamped power button and volume rocker controls. The images also suggest that the speakers are now placed on top of the device. However, the site's source has covered most of the details on the rear panel of the alleged tablet.

The site also reports some of the expected specifications of the next-generation Amazon Kindle Fire HD. It is said to feature a 7-inch display with 1920x1200 pixels resolution, and be powered by a 2GHz quad-core Qualcomm Snapdragon 800 processor coupled with 2GB of RAM. The tablet is claimed to run Android 4.2.2 Jelly Bean and is likely to come in three storage variants - 16GB/32GB/64GB.

While the 8.9-inch variant of the next-generation Kindle Fire HD tablet is said to feature almost identical specification, excepting the 2560x1600 pixel resolution display. The site also speculates that the 7-inch model of the Kindle Fire HD next-generation tablet may launch in coming weeks while the bigger variant may hit stores in November.

Earlier, Amazon's next-generation Kindle Fire HD tablets were reportedly spotted in benchmark results. The GFX benchmarks tests results showed that the tablets will come equipped with Qualcomm's Adreno 330 graphics processor which hinted that the next generation Kindle Fire HD tablet may be powered by Snapdragon 800 chipsets, which is in-line with the current report.