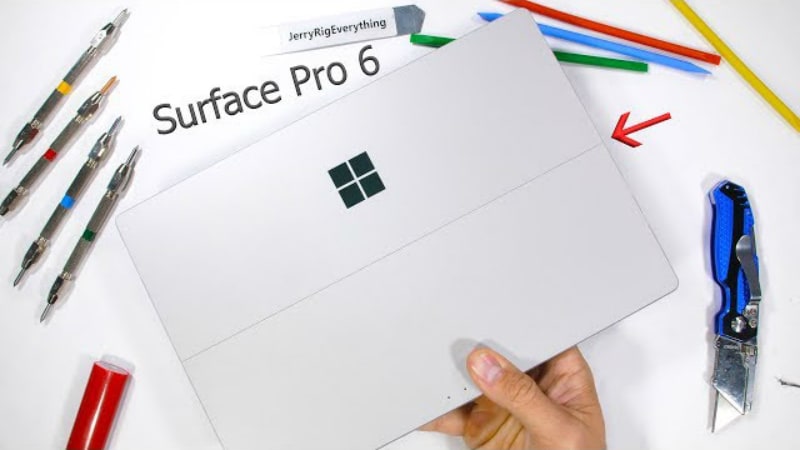 After completely destroying the iPad Pro in his bend test, Zack from JerryRigEverything put the latest Microsoft Surface Pro 6 to his durability test to see whether the Redmond giant's iPad Pro competitor can sustain his standard testing procedures. Zack tested out the display, structure, and ports of the Surface Pro 6. The tablet is seen to significantly flex upon multiple bends, while the display panel seems too fragile during his scratch test. Let's see how the Microsoft Surface Pro 6 fares overall in the popular JerryRigEverything durability test.

YouTube channel JerryRigEverything published the latest video detailing a durability test of the Surface Pro 6, right after Apple's iPad Pro (2018) was put to his excruciating procedures. Zack starts off with the scratch test wherein he uses the Moh's scale of hardness to judge the display quality. He notes that the glass appears to be a tad thicker than the one on the iPad Pro (2018). Scratches start to appear at level 6, but the entire display develops a hairline crack at level 7. “A screen protector is probably a good idea with [Surface Pro 6].”

He then proceeds to scratch the structure of the tablet. The frame of the Microsoft Surface Pro 6 is made from metal, but is not anodised making it vulnerable to scratches compared to the layer of anodising that Apple employs on its latest iPad Pro models. The power button and volume buttons on the Surface Pro 6 are made of plastic and easily scratchable as well.

Next up is the burn test. The Surface Pro 6 lasted 12 seconds under the heat of a lighter flame, but the LCD panel quickly recovered back all of those pixels within seconds of removing the flame from the surface.

As for the bend test, the Surface Pro 6 bends significantly on the first attempt and appears to have some “massive flex”. It does, however, lock out and multiple attempts of applying pressure back and forth show a gap between the screen and the frame, “We get a very twisted tablet, but with no catastrophic damage,” notes Zack. The Surface Pro 6 does not have any structural flaws at its weakest points, which makes it better than the iPad Pro (2018) in terms of structure quality. In conclusion, the Microsoft Surface Pro 6 passes the bend test. The kickstand, according to the test results, is a major factor in improving build quality.

Zack then proceeds to show us the internals of the Surface Pro 6 by opening up the display panel. “Apple went for a thin, lightweight design and sacrificed structure in the process, while Microsoft packed their tablet with guts and metal,” he said.