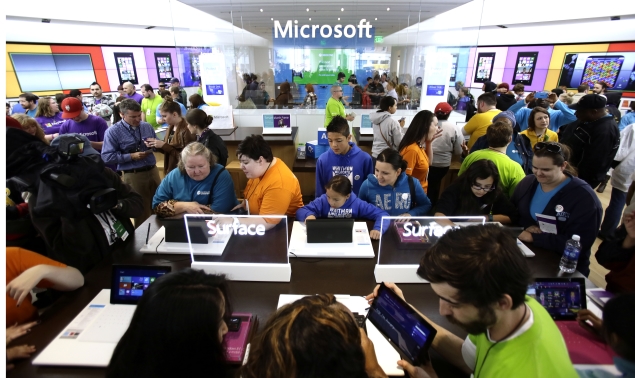 Microsoft on Thursday announced a profit of $4.97 billion in the past quarter, but its results were hit by a writedown linked to disappointing sales of its Surface tablet computer.

Microsoft took a $900 million charge for "inventory adjustments" for its Surface RT, the device aimed at breaking into the tablet market, which is growing while traditional PC sales are slumping.

Microsoft has not released sales data for Surface (Review I Pictures), but analysts say the device has been disappointing.

Microsoft has quietly cut the price of Surface tablet computer by some 30 percent, to as low as $349 for US customers, down from the introductory price last year of $499.

A survey by the research firm IDC estimated the company sold just 900,000 units in the first quarter, in a global market of some 49 million.

Microsoft previously cut the price of the Surface as low as $199 for education buyers.

Overall, Microsoft said its results were helped by growing revenues from business services, which offset the hit from a lagging market in personal computers.

Chief financial officer Amy Hood said results "were impacted by the decline in the PC market," but added that "we continue to see strong demand for our enterprise and cloud offerings, resulting in a record unearned revenue balance this quarter."

Revenues in the company's fiscal fourth quarter rose slightly to $19.9 billion from $18.1 billion a year earlier.

"While we have work ahead of us, we are making the focused investments needed to deliver on long-term growth opportunities like cloud services," she said.

The results compared with a loss in the same period a year ago of $492 million due to a massive $6.2 billion write-down to reflect the slump in value of its online operations.

Microsoft last week announced a sweeping reorganization of the company to "enable us to innovate with greater speed, efficiency and capability in a fast changing world."

The "far-reaching realignment" was designed to help integrate efforts around its software and devices.

"We are working hard to deliver compelling new devices and high value experiences from Microsoft and our partners in the coming months, including new Windows 8.1 tablets and PCs," said chief executive Steve Ballmer.

"Our new products and the strategic realignment we announced last week position us well for long-term success," he said.