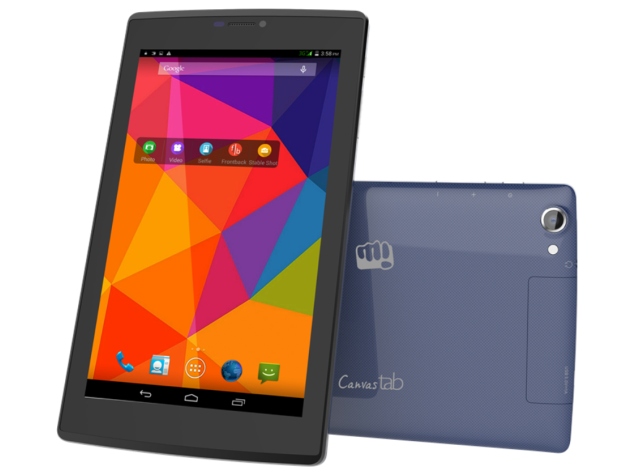 Micromax on Friday launched the Canvas Tab P480, a 7-inch voice-calling tablet with dual-SIM card support and 3G connectivity, priced at Rs. 6,999. The tablet will be available in Blue and White colour variants from the last week of April in stores.

The 7-inch IPS display on the Canvas Tab P480 sports a 1024x600 pixel resolution, while the tablet is powered by a 1.3GHz quad-core MT8382W/M processor coupled with 1GB of RAM. The tablet comes with 8GB of built-in storage, with expandability via microSD card (up to 32GB).

The new Micromax tablet bears a 5-megapixel rear autofocus camera, and a 2-megapixel fixed-focus front-facing camera. It comes with a 3000mAh battery, which is rated to deliver up to 9 hours of talk time on 2G networks, and 169 hours of standby time. Connectivity options include 3G, Wi-Fi, Bluetooth v4.0, GPS, and Micro-USB with OTG support. Sensors include ambient light sensor, accelerometer, and proximity sensor.

Earlier this week, the company launched the Micromax Canvas Spark (Review | Images), a 3G-enabled smartphone with Android 5.0 Lollipop that is priced at Rs. 4,999. A dual-SIM smartphone, it features a 4.7-inch qHD (540x960 pixels) IPS display along with Gorilla Glass 3 protection. The Canvas Spark is powered by a 1.3GHz quad-core MediaTek MT6582M processor coupled with 1GB of DDR3 RAM. The Canvas Spark bears an 8-megapixel rear camera with LED flash and an M8 Largan lens, and a 2-megapixel front-facing camera. It sports 8GB of built-in storage, which is expandable via microSD card (up to 32GB).