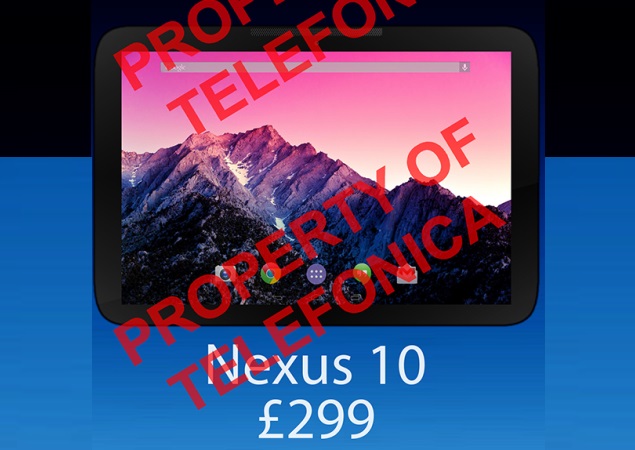 LG has been the manufacturer for two-generations of Nexus smartphones, the Nexus 4 and Nexus 5. Now, new leaked images suggest that the South Korean giant may be Google's new partner for the next generation 10-inch tablet, the Nexus 10.

The leaked images come via a Reddit user who claims to work at Spanish mobile carrier Telefonica. As per the leaked images on Reddit, the alleged Nexus 10 successor would be LG manufactured and would boast a design similar to the original Nexus 10, which was made by Samsung. Further, the low-resolution image shows the front panel of the rumoured LG Nexus 10, with model number LG-V510.

The render also reveal a front facing speaker sitting above the display and the tablet appears to run the new iteration of Android 4.4 KitKat. The second leaked image gives the purported pricing of the alleged LG made Nexus 10, 299 British Pounds (Rs. 30,300 approximately).

The Reddit user has also claimed that Google will be releasing the LG Nexus 10 on November 22, and that the tablet will come in two variants, Wi-Fi and Wi-Fi + 3G, unlike the original Nexus 10 which is Wi-Fi only. However, there is no official word on the tablet from both Google and LGon the rumoured Nexus 10 tablet.

Earlier, Google unintentionally listed the yet-to-be-announced next-generation Nexus 10 tablet on the Play Store. The listing was soon pulled down, but it possibly confirmed the complete specifications of the new Nexus 10 tablet.

The rumoured Nexus 10 tablet is said to come with 10.05-inch display with 2560x1600 pixels resolution, translating to a pixel density of 300ppi. Internally, the tablet is likely to be powered by a quad-core Snapdragon 800 processor, coupled with 3GB of RAM. It is also said to sport an 8-megapixel rear camera alongside a 2.1-megapixel front-facing camera.

The official product shots of the Nexus 10 tablet were also leaked, which were in-line with an earlier leaked render.