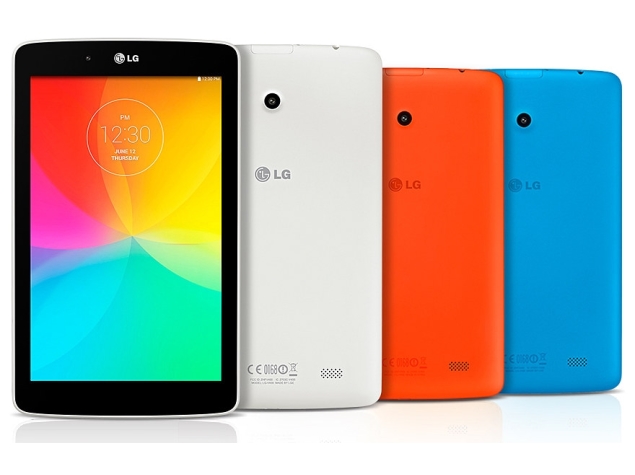 LG expanded its G Pad tablet series with the launch of G Pad 7.0, G Pad 8.0 and G Pad 10.1 tablets in May. Now, the South Korean giant has announced that its new G Pad tablets are ready for global roll-out and it will be launched in Europe initially.

Further, LG noted that pricing and additional availability details in other regions for the new G Pad tablets will be announced locally.

The LG G Pad 7.0 features a 7-inch display, as the name suggests and is powered by a 1.2GHz quad-core processor clubbed alongside 1GB of RAM. Other specifications of the G Pad 7.0 include 8GB of inbuilt storage with expandable storage support (via microSD card); 3-megapixel rear camera; 1.3-megapixel front camera; 4000mAh battery and is a Wi-Fi only variant. The G Pad 7.0 measures 189.3x113.8x10.1mm and weighs 293 grams.

Lastly, the LG G Pad 10.1 comes with 10.1-inch WXGA IPS display and is powered by a quad-core processor clocked at 1.2GHz alongside 1GB of RAM. Other specifications of the tablet include 16GB of inbuilt storage with expandable support (via microSD card); 5-megapixel rear camera; 1.3-megapixel front camera; 8000mAh battery and Wi-Fi only variant. The G Pad 10.1 measures 260.9x165.9x8.9mm and weighs 523 grams.

The new LG G Pad 7.0, G Pad 8.0 and G Pad 10.1 tablets feature company's proprietary UX features such as QPair 2.0 and Knock Code. The company notes that the QPair app, which was first seen on the G Pad 8.3 tablet, has been updated and can connect to any Android-based smartphone via Bluetooth. With the latest QPair 2.0 update, users can receive notifications of calls and messages, and will now be able to respond directly from the G Pad tablets.

LG has also included the new Knock Code feature on the G Pad tablets which the company claims is an evolution of the KnockON feature that was first introduced in the LG G2 last year. For those unaware, LG pulled the curtains off its first 8-inch tablet, the G Pad 8.3, at IFA last year.