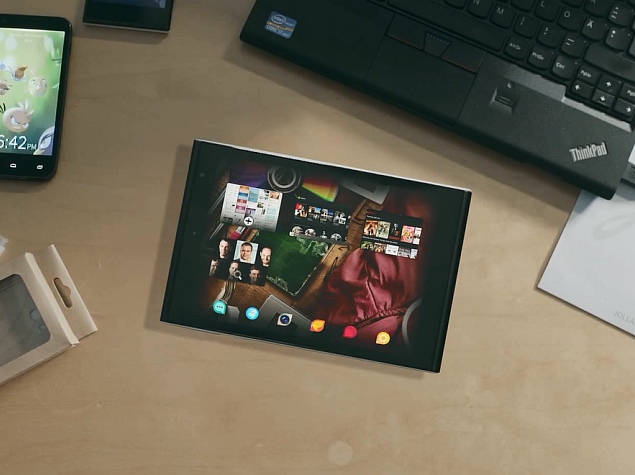 Jolla recently launched Jolla Tablet as a crowdfunding project, and within less than 48 hours, the project has crossed the $1 million (roughly Rs. 6.1 crores) mark in funding. The firm was looking to raise $380,000 to successfully fund the project, a target that was achieved within hours of launch.

The campaign started by a team of ex-Nokia employees, at the time of writing, sits at $1,043,019 (roughly Rs. 6.4 crores). The initial backers would've received the tablet for as low at $189 (approximately Rs. 11,500), though all those slots are now sold out. The tablet is now available at $209 (approximately Rs. 12,500). The company notes that the tablet will be available in the following regions: EU, Norway, Switzerland, USA, India, China, Hong Kong, and Russia, with a $20 (approximately Rs. 1,200) shipping fee. The estimated delivery of the Jolla Tablet is listed as May 2015.

Jolla Tablet runs Sailfish OS 2.0 version and offers a gesture-based interface. It will be powered by a 1.8GHz quad-core 64-bit Intel (unspecified chipset) processor alongside 2GB of RAM. The tablet includes 32GB of built-in storage and supports expandable storage via microSD card (up to additional 32GB). The tablet sports 5-megapixel rear camera while there is a 2-megapixel front camera also on board. The rear camera can record full-HD videos at 60fps.

Jolla Tablet is backed by a 4300mAh battery. The Wi-Fi only tablet also comes with Bluetooth, Micro-USB, and GPS. The Jolla Tablet will feature three sensors accelerometer, light sensor, and proximity sensor. It measures 203x137x8.3mm and weighs 384 grams.