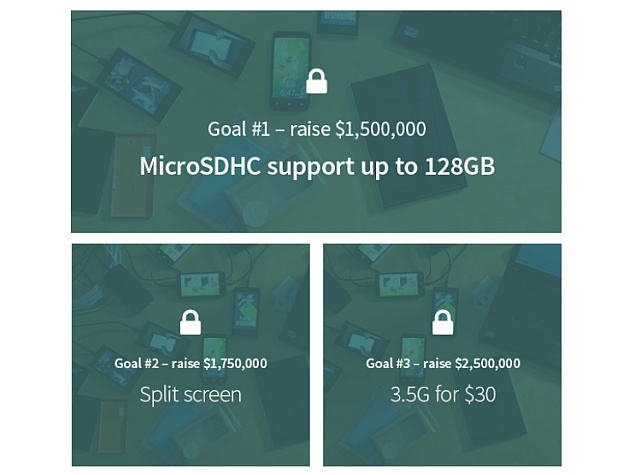 Jolla last week unveiled its first tablet as a project on crowdfunding site Indiegogo. With a target of $380,000 that would launch the Jolla Tablet in eight markets by May 2015, the Finnish company managed to exceed the goal in a few hours, and then hit $1 million within 48 hours and then offered a price cut on the Jolla smartphone. On Thursday, Jolla announced three stretch goals.

At $1,302,841 and 343 percent of the original funding goal at the time of writing, Jolla's first stretch goal at $1.5 million will see the company introduce 128GB microSDHC card support, as opposed to the current 32GB microSD card support.

The second stretch goal, at $1.75 million, will bring split screen support mode to Sailfish OS, which will allow users to view and interact with two apps at the same time, which the Finnish company says is the most-wanted Jolla Tablet on its community page.

If Jolla manages to hit its third stretch goal of $2.5 million, users will be able to buy a 3.5G Jolla Tablet for just $30 more than the price of the Wi-Fi only Jolla tablet. The company says "with most tablets on the market, similar upgrade costs at least $100."

The Sailfish OS 2.0-based Jolla Tablet features a 7.85-inch display with a resolution of 2048x1536 pixels and offers a pixel density of 330ppi. The tablet is powered by a 1.8GHz quad-core 64-bit Intel (unspecified chipset) processor alongside 2GB of RAM.

The Jolla tablet includes 32GB of built-in storage and supports expandable storage via microSD card (up to additional 32GB). The tablet sports 5-megapixel rear camera while there is a 2-megapixel front camera also on board. The rear camera can record full-HD videos at 60fps.

It is backed by a 4300mAh battery. The Wi-Fi only tablet also comes with Bluetooth, Micro-USB, and GPS. The Jolla Tablet will feature three sensors accelerometer, light sensor, and proximity sensor. It measures 203x137x8.3mm and weighs 384 grams.