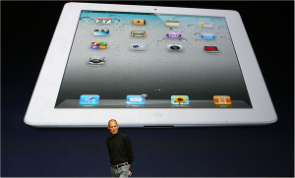 Highlights
Steven P. Jobs, Apple's chief executive, interrupted his medical leave on Wednesday to introduce the company s much-anticipated new iPad, a thinner, faster and lighter version of its popular tablet computer that will sell at the same prices as the original models.

Mr. Jobs alluded to his leave but neither commented on his health nor said whether he planned to return to the company in the near future.

We ve been working on this product for a while and I just didn t want to miss today, he said.
The iPad 2 includes front and rear cameras, allowing video conversations, and comes in black and white versions. It will be available on March 11 in the United States at prices ranging from $499 to $829. It will be available in more than two dozen other countries on March 26, Mr. Jobs said.

But the details of the product were somewhat overshadowed by Mr. Jobs's unexpected presence. His appearance lifted the mood of Apple's fans and investors who have worried about the deteriorating health of the company s visionary leader. Mr. Jobs was greeted with a standing ovation as he walked on stage in an auditorium here, and within minutes, Apple's shares jumped more than $3, or nearly 1 percent.

It is clear that he is still in charge, said Tim Bajarin, an analyst with Creative Strategies. His presence underscores how important he feels the iPad is to Apple's future. Though gaunt, Mr. Jobs, who turned 56 last week, looked roughly the same as he had in October, the last time he appeared in public to introduce a product.

In a sign of the intensifying competition in the tablet market, Mr. Jobs not only promoted the features of the overhauled iPad, but also took potshots at Apple's rivals, calling them copycats and saying they had been unable to match the first iPad on features or price. The market for tablet computers is far more competitive now than when Apple began selling the iPad nearly a year ago. Companies like Samsung, Dell, Motorola, Research In Motion and Hewlett-Packard have introduced rival tablets, though some will not be available until later this year.

But Apple's rivals have yet to make significant inroads with consumers, in part because they have had difficulty matching the iPad s pricing. The Motorola Xoom, for instance, costs $800. The Samsung Galaxy Tab is available for about $500, but at 7 inches, is much smaller than the iPad, which is nearly 10 inches.

The new iPad is built around a new chip that Apple designed, called A5, which is faster than its predecessor. Mr. Jobs said graphics performance would be nine times as fast. The new iPad is 8 millimeters thick, one-third thinner than the original and slightly thinner than the iPhone 4. Mr. Jobs said that at 1.3 pounds it was a fifth of a pound lighter than the earlier model, yet it has the same 10-hour battery life.

Alluding to the white iPhone 4, which Apple announced but never introduced, Mr. Jobs said the white iPad 2 would be available from Day 1. The new iPad s 3G models will support connections from AT&T and Verizon.

Mr. Jobs predicted that the iPad 2 would help Apple widen its lead in the market. We think 2011 is clearly going to be the year of iPad 2, Mr. Jobs said.
Some Apple developers said that they were impressed by the iPad 2, noting that it was more powerful yet simple to use.

The technology is becoming more and more invisible, said Ge Wang, the co-founder and chief technology officer of Smule, a company that makes virtual instruments for the iPad and the iPhone. Mr. Wang, who also directs an orchestra of digital instruments at Stanford, said Smule had considered making its software available on other tablets but had decided against it for now. Nothing else comes close, he said of the iPad.

While the iPad2's improvements are significant, analysts said they were largely expected.
There were no big surprises, said A. M. Sacconaghi Jr., an analyst with Sanford C. Bernstein & Company. It is an incremental step forward. But it certainly makes Apple very competitive in the market today.

Mr. Sacconaghi said the new features, along with the iPad's stable of more than 65,000 apps, would ensure that Apple retained its lead in the market for now.
Apple did not update the figures for iPad sales. In January, the company said it had sold nearly 15 million iPads in 2010, generating about $9.5 billion. Mr. Jobs said 65,000 apps had been tailored for the iPad.

Apple s share of the global tablet market reached 85 percent by the end of 2010, according to estimates by eMarketer, a research firm. Apple will sell an estimated 34 million iPads in 2011, or more than triple the 10 million tablets expected to be sold by its rivals, eMarketer said.

Along with the new iPad, Apple introduced a new version of its software, iOS, and two new popular applications already available on its Macintosh line of computers: iMovie and Garage Band.

Mr. Jobs also announced that books from Random House, a holdout publisher, would be available on its iBookstore. He said 100 million books had been downloaded since the company introduced the store a year ago.

In a show of Apple's knack for innovative design, Mr. Jobs demonstrated a new thin iPad cover that attaches to the tablet through magnets, is able to turn the device on and off, and doubles as a stand.