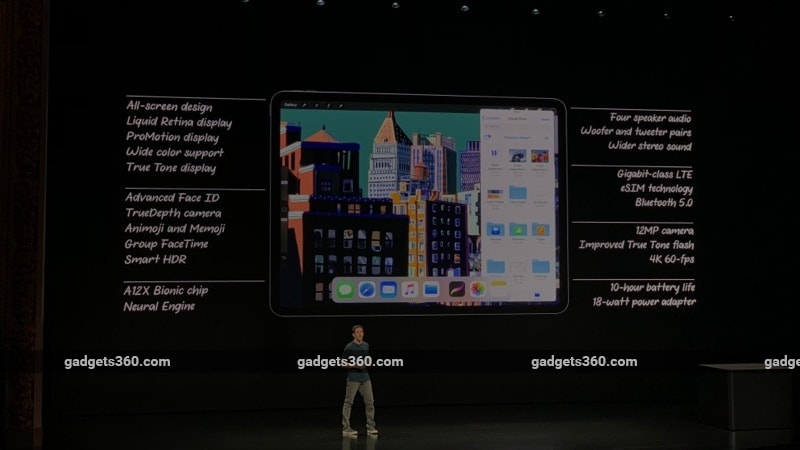 Apple in New York on Tuesday announced the launch of the much-awaited refresh to its iPad Pro range of premium tablets. The new iPad Pro comes in two sizes — 11-inch and 12.9-inch — with upgrades including a sleeker design, thinner bezels, no home button, support for Face ID technology with Animoji/ Memoji, a faster Apple A12X Bionic chip, a USB Type-C port instead of the proprietary Lightning port, and a 7-core Apple graphics chip. Notably, this is the first iOS device to sport the USB Type-C connector port, but it doesn't have a headphone jack. The Apple Pencil has also received its first upgrade since 2015 and now comes with a new design alongside wireless charging support magnetically attaching to the new iPad Pro.

Apple claims that it has sold 400 million iPad units to date, making it the “most popular tablet in the world”. The tech giant also unveiled the latest MacBook Air and Mac mini models at the launch event.

The all-new iPad Pro models are powered by the company's latest in-house Apple A12X Bionic 7nm SoC. The SoC has an 8-core CPU and a 7-core GPU, the latter offers 2x the graphics performance compared to last year's Apple A11X. The new SoC has more than 10 billion transistors. The iPad Pro now comes with up to 1TB of inbuilt storage.

For the first time on an iPad, the iPad Pro 2018 models get a neural engine in the A12X Bionic chip. This allows for the implementation of machine learning to help you access UI elements and apps in an enhanced manner.

The second-generation Apple Pencil comes with a brand new design, and now attaches magnetically to the new iPad Pro. It's priced in India at Rs. 10,990. It automatically starts charging wirelessly when connected.

A new Smart Folio folio case has also been launched that protects both the front and the back of the tablet.  It also provides open-to-wake and close-to-sleep functionality. It's priced at Rs. 7,500 and Rs. 9,900 for the 11-inch and 12.9-inch sizes respectively.

Also new is a refreshed Smart Keyboard Folio, designed to protect both the front and back of iPad Pro. The new folio keyboard lets you prop up the iPad at two different angles and just like before, it connects to the iPad via the Smart Connector so it doesn't require pairing or charging. It's priced at Rs. 15,900 and Rs. 17,900 for the 11-inch and 12.9-inch sizes respectively.