Both 11-inch and 12.9-inch iPad Pro models and the 24-inch iMac will be up for pre-orders starting tomorrow. 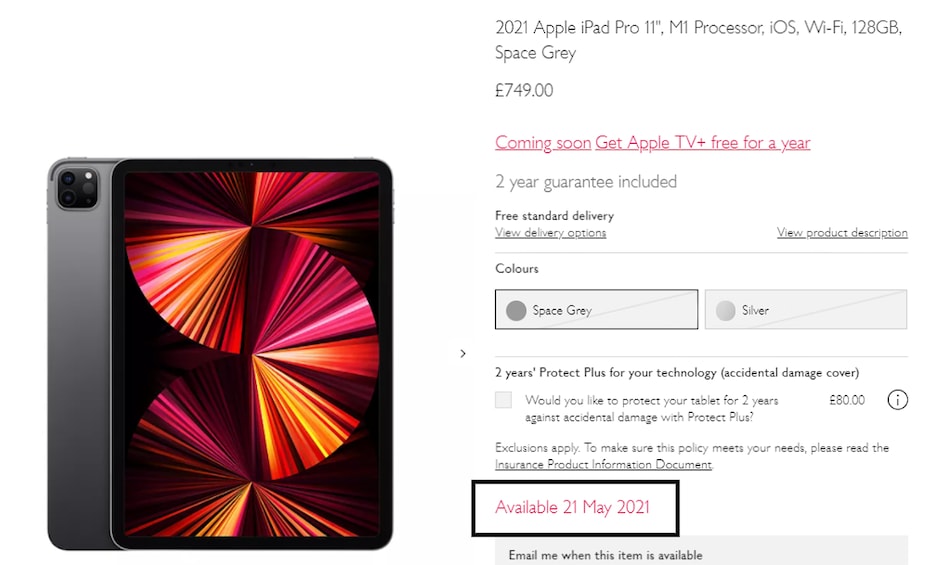 iPad Pro, iMac, and Apple TV 4K received upgrades at Apple's Spring Loaded event last week. The Cupertino tech giant launched iMac (2021) with an all-new avatar, while iPad Pro was refreshed with Apple M1 SoC, mini-LED display, and 5G support. Apple announced that both the products will be up for pre-orders starting tomorrow, but a sale date was not revealed. It was vaguely pegged to be ‘second half of May,' but a UK retailer has now ousted availability on the new iPad Pro models and the new 24-inch iMac.

UK retailer John Lewis lists both the iPad Pro models and the new 24-inch iMac, showing an availability date of May 21. This falls in line with Apple's official claims of making it available in the second half of May. Even YouTuber John Prosser tipped that the new iPad Pro models will be available on May 21. He had earlier suggested a May 22 sale date for the iPad Pro 11-inch model, but that has now been corrected, with Prosser saying “the 22nd date I mentioned is linked to the 5G model for a certain carrier and should be disregarded for the most part.”