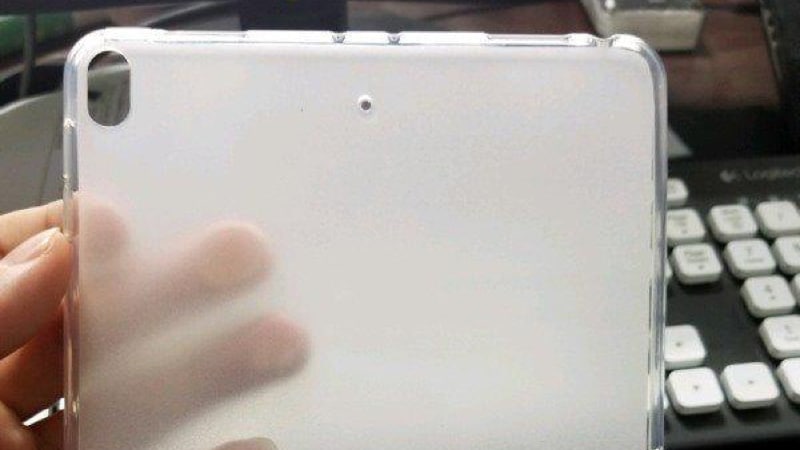 After recent reports that suggested Apple could be working on a new iPad mini, a fresh leak hints at possible features of the upcoming iPad mini model. A leaked case, possibly of the upcoming iPad mini 5 (or whatever Apple calls the next iPad mini), reveals camera and other design details. Apple had launched the iPad mini 4 back in September 2014 which means a possible upgrade could be on the cards, even if it's just a new variant with support for Apple Pencil.

Slashleaks posted images of the alleged iPad mini 5 case on Twitter which revealed a vertical cutout on the rear side for a camera - tipping a dual camera setup. This could translate into a major upgrade in the camera department for Apple's smaller iPad model. There's even a hint of the presence of LED flash which is likely to accompany the dual rear camera setup.

The leaked case also reveals a hole for a rear mic at the top along with a hole for the good old headphone jack on one end of the top. There's also a cutout which appears to be suited well for a smart connector, hinting at support for a smaller smart keyboard for the iPad mini 5.

It's still unclear if this case is genuine given a large number of leaks that float around whenever Apple is expected to launch a new device.

Earlier in October this year, well-known analyst Ming-Chi Kuo had posted his predictions around the iPad mini 5. He claimed that the new iPad mini model will offer a new processor and an affordable display panel. This means we won't see any iPad Pro-like features but, possibly, a decent price tag. The iPad mini 5 was also tipped more recently, earlier this month, when it was said to go into mass production later this month for a 2019 launch.

To recall, Apple had released a new iPad 9.7-inch model this year with support for Apple Pencil, followed by the new iPad Pro 2018 models in October this year.