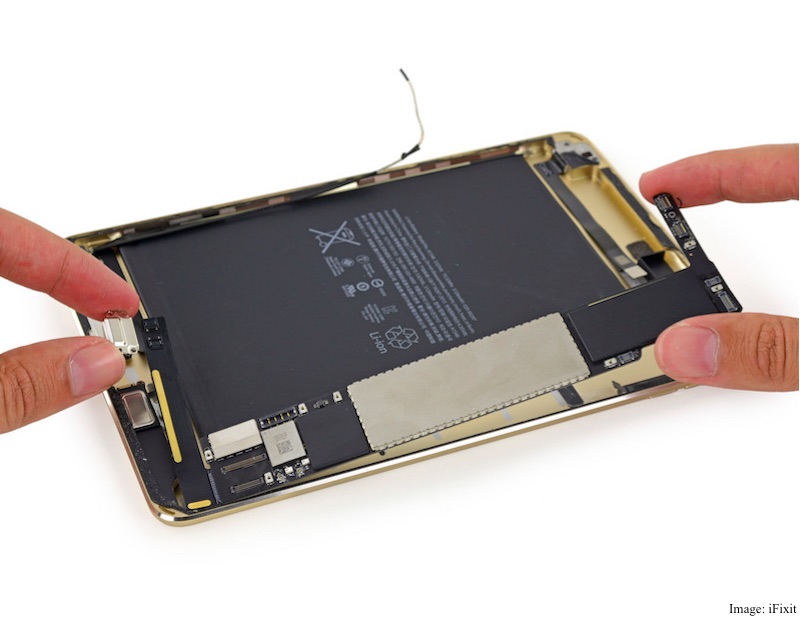 In addition to unveiling the Apple TV, iPad Pro, iPhone 6s, and the iPhone 6s Plus at its mega event earlier this month, Apple also unveiled the iPad mini 4, the successor to the iPad mini 3. The company says that the new iPad mini comes with largely the same hardware specifications as the iPad Air 2, while being thinner and lighter than the iPad mini 3. How true is that claim, and moreover, how do other changes to the real estate look from inside? We now have a more concrete answer, based on a teardown of the tablet.

Folks over at iFixit have cracked open the new miniature tablet from Apple to reveal information about each component the iPad mini 4 comes with. As per the teardown, the iPad mini 4 features the same full laminated screen technology - with the glass and display fused together - as seen in the iPad Air 2. Furthermore, much like the iPad Air 2, the Touch ID cable on iPad mini 4 is now integrated directly into the display cable. On the flip side, this makes it harder to fix the display panel.

The company has made some changes to the battery design as well, making it easier to swap them out if required. Instead of two cells stacked together, the iPad mini 4 comes with a single cell battery, which is smaller and thinner than the battery in iPad mini 3. The iPad mini 3 shipped with 23.8Wh lithium-polymer battery, whereas the iPad mini 4 comes with 19.1Wh battery. The antennas have also been reordered inside the mini 4. Half of them are now on the top of the device, whereas the rest is located on the bottom.

The iPad mini 4 sports an 8-megapixel rear-camera coupled with 1.2-megapixel front-facing camera. It has Apple's A8 processor -- which is actually not the chipset as the in the iPad Air 2. The Air 2 shipped with A8X processor, the iPhone 6 and iPhone 6 Plus shipped with A8 processor. The device comes with M8 coprocessor.

The iPad mini 4, much like most Apple products is harder to repair. The immense amount of adhesive inside the device, and the fact that Lightning connector is soldered to the logic board makes the device incredible difficult to open and repair. The iPad mini 4 has been given a repairability of 2 out of 10.