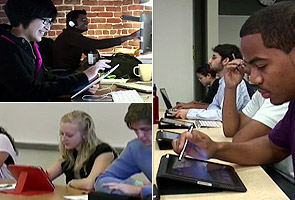 Highlights
It's back to class on campuses all over the country and this semester instead of lugging around piles of textbooks, some students are simply carrying one device. The iPad.

"One of my classes I haven't even bought a notebook. I use the notes on my iPad. It's been nice to just scroll through the pages as I hear what's going on in class," says Chloe Sparr, Seton Hill student.

First year Med students at Stanford were just given iPads which they say are more versatile than laptops.

"You can write on it so that's a clear advantage because as you're going through lectures or anatomy classes, you're drawing diagrams and making connections you wouldn't really be able to do on a laptop," says Malcolm DeBaun, Stanford Med student.

Some students are using an iPad app called inkling, converting textbooks to software.

"We're really trying to rethink the structure of a textbook to build something that's more interactive and engaging, something completely different than if you just copied a textbook onto a computer screen," says Matt McInnis, Inkling Founder & CEO.

Using iPads could potentially save students a lot of money as most spend thousands of dollars on printed textbooks.

Some iPad textbooks cost about half as much as hard copies. Inkling says most textbook publishers have embraced the new technology and so far both students and teachers give the iPad high marks.

"There's just this additional visual and audio connectivity that I think they're really going to remember more. Time will tell but I think they will," says Catherine Giunta, Seton Hill Professor.

Another lesson learned is a green one using iPads or other tablets could significantly reduce a school's paper use.
Comments