iPad Air 2 Up to 55 Percent Faster Than iPhone 6; Fastest iOS Device Yet 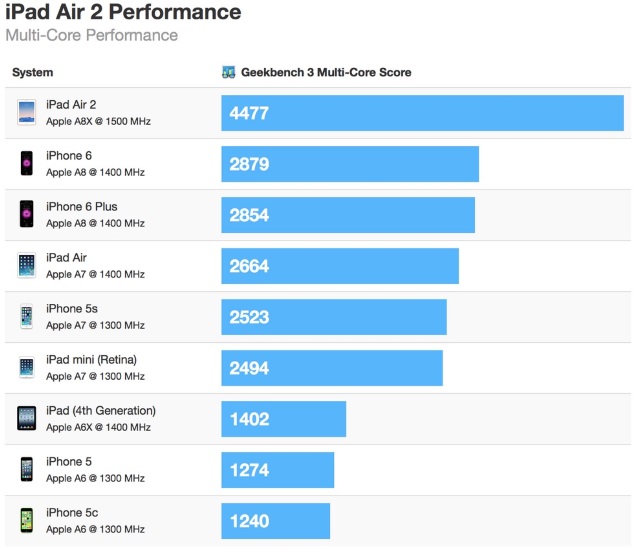 Apple's new A8X chip on iPad Air 2 reportedly pegs the tablet as the fastest iOS device ever. According to performance comparison chart based on cross-platform processor benchmark Geekbench 3 by Primate Labs, the iPad Air 2 is up to 55 percent faster than iPhone 6, and up to 68 percent faster than last year's iPad Air.

The performance comparison chart by Primate Labs (via Macrumours) was released on Tuesday, and finds that the Apple A8X is a 1.5GHz triple-core SoC that is coupled with 2GB of RAM on the iPad Air 2.

The benchmarks indicate that the Apple A8X chip combined with the relatively (considering other Apple devices) amount of RAM have led to huge performance gains compared to the A8 chip found in the iPhone 6 and iPhone 6 Plus. According to Geekbench 3 multi-core benchmark test, the triple-core A8X powering the iPad Air 2 makes the tablet up to 55 percent faster than the iPhone 6 and iPhone 6 Plus with their dual-core A8 chips.

iPad Air 2 with a 3-core processor is the fastest multi-core iOS device by a large margin. pic.twitter.com/xBnjG613ba

How to Completely Wipe Your BlackBerry 10 Phone
From 2D to 3D: How Hollywood Gains an Extra Dimension in India