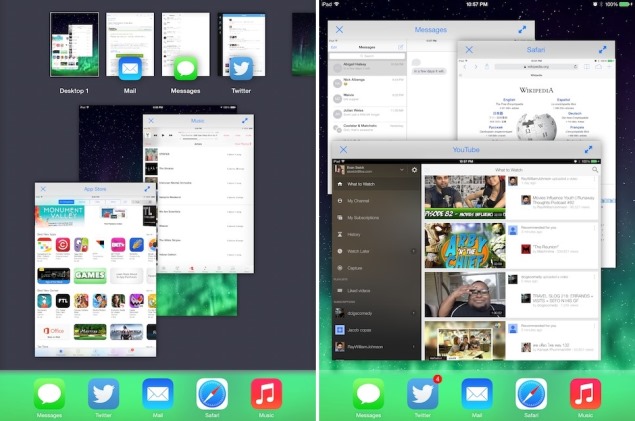 A new hack for jailbroken iPads called OS Experience allows users to run multiple apps in floating windows just like on a full-fledged desktop PC. The hack, which is available on the unofficial Cydia app store, even supports gestures to let users dock apps side by side, drag them across screens, and switch between them quickly.

The official Cydia download page describes OS Experience as a window manager and app switcher. Instead of swiping between full-screens app, users can swipe between virtual desktops which each have one or more app running on them. Much like desktop OS X's Mission Control feature, users can see live previews of each app as it runs, and group apps on a desktop for maximum productivity. Apps can of course still be maximised to occupy the entire screen.

Swiping down with four fingers reveals a title bar with controls allowing apps to be resized and repositioned on screen. TheNextWeb describes OS Experience as "incredibly fluid and surprisingly stable".

The hack was created by American developer Evan Swick, who uses the Twitter handle e_swick and Reddit username eswick. Swick, who describes himself as an "insane iOS developer with a plan for world domination", promises even more such hacks in the future.

OS Experience costs $9.99 (approximately Rs. 600) and could be a fantastic tool for power users, but it requires a jailbroken iPad running iOS 7 or higher. The current version is 1.0.8, which includes a few bug fixes and interface improvements. It also the popular Activator hack which lets users define their own gestures to quickly trigger actions such as task switching.

Apple has so far maintained its full-screen-only model for running apps. Users can swipe between open apps, but not run more than one in the same screen. This has led to a simple, consistent interface, but also serves to conserve battery life and processing power. It is not known whether the OS Experience hack will have an adverse effect on battery life.