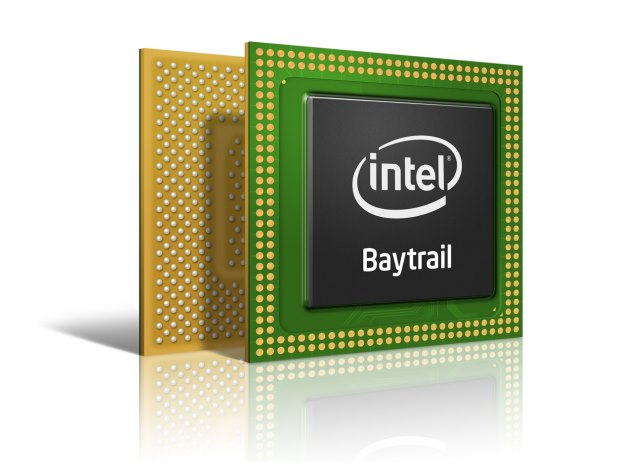 Intel is reportedly preparing to launch two new lines of mobile processors at the 2014 Mobile World Congress, to be held in Barcelona next week. According to a leaked roadplan, Intel will launch a new Atom series for smartphones, codenamed Merrifield, and an update to the Bay Trail tablet platform codenamed Bay Trail-T.

Bay Trail was Intel's first out-of-order architecture for low-powered devices. Now, Bay Trail-T will mark the introduction of a 64-bit architecture to Intel's tablet offerings. Integrated system-on-a-chip processors based on Bay Trail-T will feature four cores running at up to 2.1GHz, with DirectX 11-class integrated graphics and support for dual-channel DDR3 RAM. Initial SoC products, codenamed Valleyview, will be aimed at Android tablets and will enter the market as Intel Atom Z3xxx parts. Valleyview will feature improved HD video encoding and decoding, and will support display resolutions of up to 2560x1600.

Bay Trail-T is projected to offer performance gains of up to 60 percent compared to the previous generation Clover Trail. Typical devices with Bay Trail-T CPUs should be able to stay on standby for 20 days or play video for 11 hours between charges.

Merrifield will be the followup to Medfield, and will be known publicly as the Intel Atom Z34xx series. Two Merrifield SoCs are reportedly in the pipeline, but no further details are known yet. Intel will presumably detail the features and specifications of these processors at MWC.

Although Intel processors have started showing up in tablets running Android as well as Windows, the smartphone market has repeatedly eluded it. Merrifield will be a crucial product for the world's largest chipmaker.

Intel has also been making substantial contributions to the Android codebase to get it up and running on 64-bit x86 processors.

Technology website vr-zone.com has published images purported to be a roadmap for Intel's CPU launches across categories for this year. In addition to Bay Trail-T and Merrifield, a desktop refresh of the Haswell platform is purportedly scheduled for later in the first quarter of 2014, along with new 9-series chipsets. High-performance Haswell-E CPUs for enthusiasts and workstation customers will launch early in the second half.
Comments