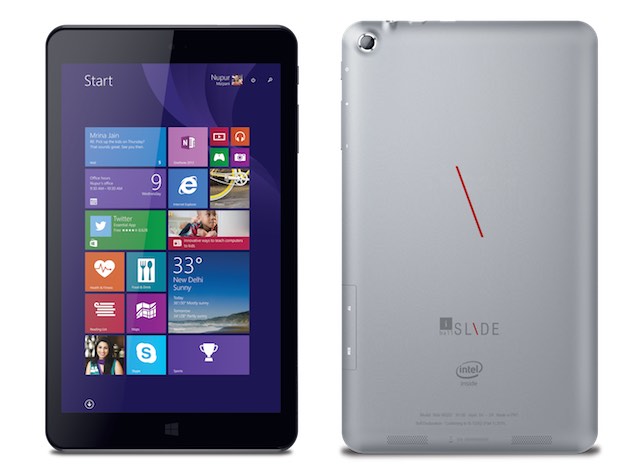 iBall has launched its 'first 3G business tablet' in the Indian market, the iBall Slide WQ32 tablet, priced at Rs. 16,999.

The company says it has launched the Intel Atom-powered and Windows 8.1-based tablet in collaboration with Intel and Microsoft. The tablet will hit shelves 'within few weeks'. iBall also announced it would be launching its first 2-in-1 tablet in the Indian market, a 10.1-inch offering, by the end of this month.

The Slide WQ32 is said to come with several 'free licences', including a 1-year Microsoft Office subscription, 1TB of free OneDrive cloud storage for 1-year with OneDrive Sync, and Windows Defender Antivirus and Firewall.

The iBall Slide WQ32 tablet features a 8-inch HD (1280x800 pixel) IPS display, and is powered by an quad-core Intel Atom Z3735D processor (base clock 1.33GHz, up to 1.86GHz burst frequency, 4 cores, 4 threads, 2MB of cache) coupled with 2GB of DDR3 RAM. It comes with 16GB of built-in storage that is further expandable via microSD card (up to 64GB). It features a 5-megapixel autofocus rear camera with flash, and a 2-megapixel front camera.

The company is also touting the ability of the tablet to connect to a variety of plug-and-play accessories and peripherals, from a keyboard to a mouse, speaker, projector and scanner.

Commenting on the launch, Sandeep Parasrampuria, Director iBall, said, "iBall is excited to present the Intel based Windows Tablet PC. The latest association with the IT stalwarts Intel and Microsoft further reinforces our position as one of the leading brands in Tablet PCs. We are proud to work with Intel and Microsoft who have been trend setters in technology."

Highlighting Intel's association with iBall, Anand Ramamoorthy, Director Consumption Sales, Intel South Asia, said, "The new iBall tablet and 2-in-1 powered by the Intel Atom Processors will not only provide an ideal balance of performance and battery life but will also deliver a great value for money proposition to its users. Intel Atom processor-based tablets running Windows 8 provide efficient performance and built-in security features to meet the users' business needs."

Neeraj Gill, Group Director - OEM, Microsoft India, added, "I congratulate iBall on the launch of their first Windows-based tablet today. Our deep engagement with local OEMs is one of the engines of growth for Windows and we are proud of our partnership with iBall. With iBall Slide Tablet PC, Windows-based tablets are now available to a whole new group of consumers in India, who are looking for innovation and value. Consumer usage patterns around technology are constantly evolving and people are looking for tablets which allow both work productivity and entertainment. The iBall Slide Tablet PC offers consumers the power of a PC in a tablet and comes with a free one-year subscription of Office 365 Personal that includes Power Point, Word, Excel, OneNote plus 1TB of cloud storage through OneDrive."