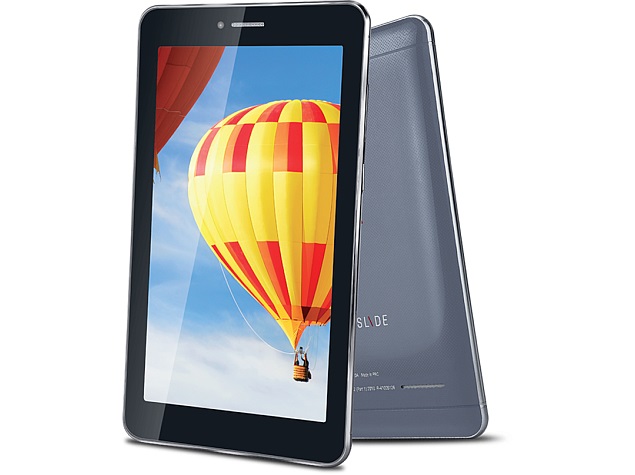 iBall has introduced a new 3G-enabled tablet, the Slide 3G Q45, priced at Rs. 6,599. The tablet is now listed on the company's site with pricing details; though no availability details are revealed.

The iBall Slide 3G Q45 tablet however is available to buy via a third-party retailer at a discounted price of Rs. 5,327. The highlight of the tablet is it supports 3G connectivity, as the name suggests, and comes with single-SIM support with voice calling via a built-in earpiece receiver.

It features a 7-inch (1024x600 pixels) display and is powered by a quad-core processor clocked at 1.2GHz coupled with 512MB of RAM. The Android 4.4 KitKat-based tablet comes with 8GB inbuilt storage that is further expandable via microSD card (up to 32GB). It also features wire-free FM with antenna. The tablet sports a 2-megapixel rear camera with LED flash while a 0.3-megapixel front-facing camera is also on board. The iBall Slide 3G Q45 tablet supports USB OTG, Wi-Fi, Bluetooth, and Micro-USB connectivity options.

On Monday, iBall launched another voice-calling tablet in India, the Slide 3G-i180. Priced at Rs. 10,499, the company's first Intel-based Android tablet will go on sale shortly.

The iBall Slide 3G-i80 sports an 8-inch (1280x800 pixels) HD IPS display. It is powered by a 64-bit 1.33GHz (up to 1.83GHz in Burst mode) quad-core Intel Atom Z3735F processor, coupled with 1GB of RAM. The Slide 3G-i80 bears a 5-megapixel autofocus rear camera, and a 2-megapixel front-facing camera. It comes with 16GB of built-in storage, expandable via microSD card (up to 32GB). Featuring a SIM-card slot and 3G connectivity, the Slide 3G-i80 tablet also features Wi-Fi, Micro-USB with OTG, Micro-HDMI, and Bluetooth options. The voice-calling tablet has a 4400mAh battery, and the company is touting support for 19 Indian languages on board the iBall Slide 3G-i80, which runs Android 4.4 KitKat.