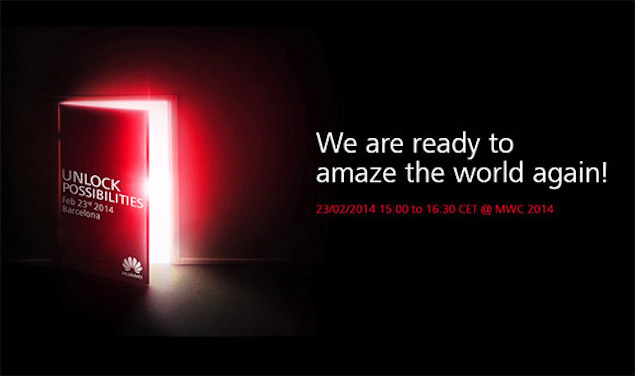 A white-coloured phone that looks suspiciously like the iPhone 5s. A voice assistant on the phone that sounds like the Chinese version of Siri. And the cellphone owner, who asks her, 'What is new at this year's Mobile World Congress?' These are the elements that tie the three new devices that Huawei, plans to showcase at the Mobile World Congress (MWC) in Barcelona, at its 23 February event.

A 1:01 minute long video made by the Chinese cell phone manufacturer showcases a teaser of the new product range, albeit in a tongue and cheek manner. The video showcases a new mobile phone and two tablets.

The first of the three products is a tablet, with a "beautiful slim design". It is important to note, the Huawei MediaPad X1 had received its Tenaa certification in the first part of February, so it might be possibly the tablet to be showcased at Barcelona. Reports suggest that it is powered by a Hisilicon 910 Kirin chipset (1.6GHz quad-core, Mali 450 GPU, 2GB of RAM) and will be running the older (surprisingly) version of Android 4.2.2 Jelly Bean on it.

The Huawei teaser video also speaks about the "huge battery" of the tablet, which the Siri-esque voice assistant says will give users "days of use".

Next in the teaser video, Huawei describes a new smartphone, which an "amazing front camera". Rumours suggest the device could be the Ascend P7, the successor to the Ascend P6. The leaked specs of the phone point to a 5-inch, 1080p screen, the Hisilicon 910 chipset, 13-megapixel rear camera and a massive 8-megapixel front camera. The battery capacity is slated at 2460mAh.

The teaser also speaks about a "new multimedia tablet" that gives a good entertainment experience. Huawei says the tablet will feature a LTE connectivity..

Uploaded a day ago, it has already garnered over 106,000 views. There is a tongue-and-cheek humour towards the very end, where the cellphone owner cheekily asks the name of the companies and enquires "Wow! What are they? Fruit or Some song?" (obviously digs at Apple and Samsung), with the assistant replying back 'No, they are Huawei'.