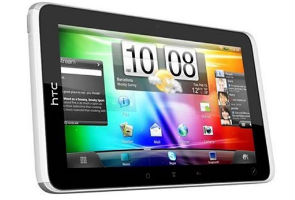 Highlights
HTC's new tablet, the Flyer, is the latest iPad competition in India. It will launch today at a relatively high price point of Rs 39,890.

Disappointingly, the 7-inch 1024 x 600 resolution tablet does not run on Google's tablet specific Honeycomb OS but on Google's mobile OS Gingerbread skinned with the latest version of HTC sense instead.

A 1.5GHz single core processor powers the Flyer. It also features HTML 5 and Flash 10 support. This is a deviation from tradition in a tablet market dominated by the NVIDIA Tegra 2 1GHz dual core processor. It offers 32GB storage and 1GB of RAM.  The back of the device houses a 5MP camera and the front has a 1.3MP camera for video chat.

Uniquely, the tablet allows the use of a stylus-like pen to draw and write. With the pen, you can take notes, sign contracts, draw pictures, or even write on a web page or photo. There is no way to stow the stylus in the device itself, but you could use the provided carry-case. It is easy enough to lose styli even when housed inside a phone or tablet, and without a good stowing mechanism you might have to buy a new stylus more often than you like.

The Flyer seems like a well-built device, but does it justify the price tag of Rs. 39,890? Stay tuned for the compete review, coming soon.
Comments