Hi, I'm a Tablet. I'll Be Your Waiter Tonight 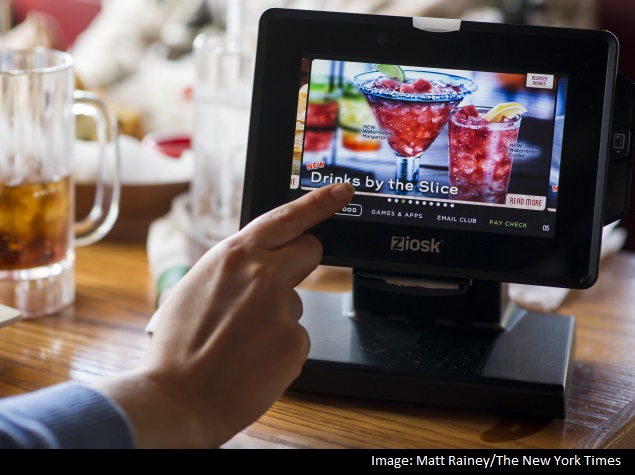 An idea came to Ronald M. Shaich, chief executive of Panera Bread, as he was driving his children to school about four years ago: What if everyone could order lunch the way he did?

The Shaich household's morning routine included a call to the manager of the nearest Panera location to order lunch for Shaich's son (Asian sesame chicken salad with half the normal amount of chicken and twice the won ton strips) and daughter (various salads but with dressing on the side).

The family then hopped in the car, stopping on the way to school to pick up the lunches. "It suddenly occurred to me that this was a wonderful system for the CEO, but what about the other 8 million people who order from Panera?" Shaich said.

"Everyone else got in line to get to the register, then got in another line where they had to play a game called Go Find Your Food," he said. "For drinks, they had to go to another line, and if they wanted any kind of espresso drink, we sent them to a fourth line."

Restaurants have been late to the tech party, and many are now scrambling to incorporate tablets, apps, computerized kitchen equipment and data analysis capabilities. Applebee's is trying out online ordering and tablet payment systems, and in Asia, McDonald's has been testing what it calls the Happy Table, an interactive table that "plays" with children using mobile devices.

Chili's Grill & Bar has added computerized ovens that use conveyor belts, infrared technology and hot air to prepare food - at a cost of $100,000 per oven - in each of its 1,200 restaurants. Together with tableside tablets that allow customers to reorder desserts and alcoholic drinks as well as pay their bills and play games without the help of a waiter, new technology has helped Chili's address one of its customers' biggest complaints - slow service - and add higher-margin items to its menu.

"These things have helped our customers expedite and control their experience more, which in turn is good for our business," said Wyman Roberts, chief executive of Brinker International, which operates Chili's and Maggiano's Little Italy.

But Roberts also noted that incorporating technology carried risks. Even in a world increasingly run off iPad like devices using apps like Uber that increase customization, consumers can still be put off by technology they perceive as annoying or unable to deliver on what it promises.

"If I get a promotion for a new appetizer or a coupon over my app, the restaurant that offered it better have the supplies in inventory and a kitchen system that can produce it when I want it," said Scott A. Rosenberger, leader of Deloitte Consulting's travel, hospitality and leisure practice. "The reality of it is that there is tremendous potential upside, but execution is a challenge."

"While the growth of couponing and online check-in and ordering is expanding rapidly, we don't think that's really where the future lies," Rosenberger said. "The research says overwhelmingly that the future lies in offering games, awards, entertainment and other ways of keeping me engaged without being creepy and digging too far into my privacy."

Chili's has teamed up with Ziosk, a company that offers a tabletop small tablet with a menu, ordering options, games and a payment system. Austen Mulinder, chief executive at Ziosk, says roughly 20 million transactions a month take place over the company's system.

Roberts of Chili's said about a fourth of the customers answered a survey about their experience, providing feedback. The system is so sophisticated that it can ask different questions to customers based on their orders, soliciting opinions on a new special or dessert item. A customer who has a coupon can opt to switch on a camera that will read it, or use the camera to upload a photo to Facebook or Pinterest.

Chili's pays Ziosk a monthly service fee, but if enough customers opt to pay to play games on the system - trivia is the most popular game at Chili's - it can make that money back under a revenue-sharing agreement.

Similarly, Panera has found its investment in kitchen technology as beneficial as the tablets and apps it offers consumers. Color-coded screens deliver orders to the kitchen staff: A red stripe over an ingredient means leave it off, a green stripe indicates an addition. Other colors signify takeout.

The orders roll in from kiosks in the front of the store where customers peruse a broader menu than can be displayed on boards above cash registers.

Customers can add or subtract ingredients, save their preferences for the next visit, swipe credit cards and move on to pick up their meals. "Most of us are creatures of habit; we order the same thing," said Hope Neiman, chief marketing officer at Tillster, which has built technology programs for Chili's, Taco Bell and Subway. "Remembering how a customer likes his favorite meal helps create stickiness among guests - and that's what this is all about, increasing retention, frequency and average check size."

The new system has helped the Braintree location reduce errors in orders, which could run as high as six out of every 10, in that way increasing profitability, said Chris Hogan, its manager. It has allowed Hogan to reduce workers at the cash register and add them to the kitchen.

Panera's customers also can order directly from their tables, using their mobile phones. Those meals can be delivered to the table, eliminating the lines that concerned Shaich.

Panera has installed the new technology in about 20 company-owned restaurants around Boston and Charlotte, North Carolina, at a cost of about $125,000 each, the company said. "Profits are up in all of them, and orders have increased," Shaich said.

Ed Doherty, owner of Doherty Enterprises, which has 35 Panera restaurants in the New York area, was initially skeptical of Panera's shift and its plans for table service in particular. "I have some very high-volume cafes with limited seating, so I like it when people stand on line because it gives the people sitting down a chance to eat their meal," Doherty said.

On a trip to Charlotte, North Carolina, he visited a Panera with the technology-driven system, experimenting with the options for ordering. "I looked at it, observed it, played with it, and I walked out of there saying, 'Ron has really gotten it - this works,'" Doherty said.

He said he preferred investing in technology to forced remodeling, which several restaurant chains have imposed on their franchisees in the last few years. "For the most part, a remodel maintains your business; there's no way to see a real return on the investment," he said. "I think this investment, though, will increase our guest counts and sales."