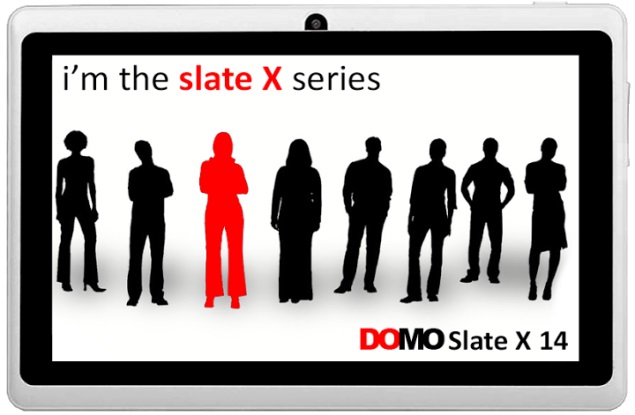 DOMO has launched the Slate X14 tablet for Rs. 4,990, targeting students.
Commenting on the launch, Mazher Shaikh, Business Development Manager at DOMO said, "DOMO Slate X14 has been designed especially for student offering value for money features. With support for most 3G dongles, users can stay connected to internet on the go."

The DOMO Slate X14 comes with 7-inch LCD display with a resolution of 800x480 pixels. It is powered by a 1GHz Cortex A8 processor, that is coupled with a Mali 400 GPU and 512MB of RAM. The tablet comes with dimensions of 182x121x10mm and weighs in at 305 grams. It features 4GB of built-in storage which can be further expanded up to 32GB with the help of a microSD card. The tablet runs Android 4.2.2 Jelly Bean with Flash support,

Other specification of the Slate X14 include a 2-megapixel front camera, and such connectivity options as Wi-Fi, Micro-USB and 3G via external USB dongle. The tablet does not come with SIM support. The DOMO Slate X14 can playback 1080p videos, and runs on a 3000mAh battery.

Recently, Lava's budget tablet E-Tab Velo+ went up for pre-order online at Rs. 4,699. The Lava E-Tab Velo+ features a 7-inch IPS display (800x480) and is powered by a 1GHz Cortex A8 processor along with 512MB RAM. The tablet also runs Android 4.2.2 Jelly Bean. It sports a 0.3-megapixel front-facing camera, and features 4GB of built-in storage that can be expanded up to 32GB via microSD card. Connectivity options include Wi-Fi, USB and 3G support through external dongle. The tablet is backed by a 2500mAh battery, and includes a video player app, an audio player app and a 3.5mm audio jack.