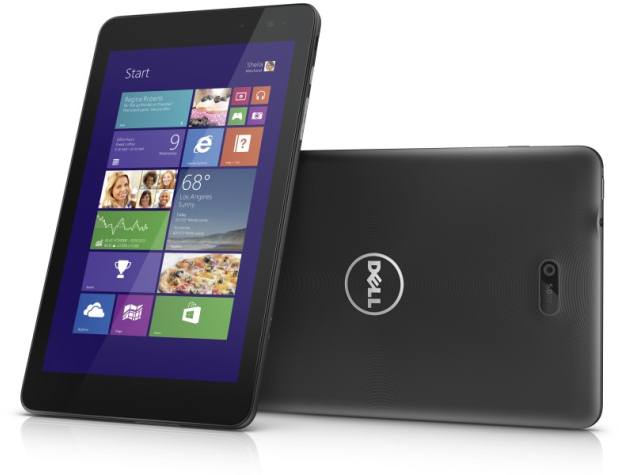 Dell has launched a pair of Windows-powered tablets in India; the 8-inch Venue 8 Pro and the 11-inch Venue 11 Pro. Both devices run Windows 8.1 and are targeted at people who bring their own devices to work and use them for personal entertainment as well as productivity. The Venue 8 Pro will be available starting at Rs 26,499 while the price of the Venue 11 Pro has not yet been announced. The company also announced the launch of two Android-based tablet models.

The smaller of the two tablets, the Dell Venue 8 Pro comes with a 1280x800-pixel HD IPS screen and runs on a quad-core 1.8GHz Intel Atom processor with integrated HD graphics, along with 2GB of RAM. Available in red and black, the tablet weighs 395g and is 9mm thick. Storage capacity is 32GB, with a 64GB model coming soon. Expansion is offered via a microSD card slot. Microsoft Office Home & Student 2013 is included. Other features include a 5-megapixel camera on the rear and a 1.2-megapixel camera on the front. Battery life is rated at 9.9 hours.

The Venue 11 Pro has a full-HD 1920x1080-pixel screen with support for 10-finger simultaneous touch. It also runs on an Intel Atom processor, clocked at 2.4 GHz. Storage is either 64 GB or 128 GB depending on the model. There's an 8-megapixel camera on the back and a secondary 2-megapixel front-facing webcam. The Venue 11 Pro has a full-sized USB 3.0 host port for connecting external storage devices and peripherals, in addition to a mini-HDMI video port. It supports dual-band Wi-Fi 802.11n, Bluetooth 4.0 and NFC (Near-Field Communication) for easy pairing of wireless accessories. Battery life is estimated to be between 8 and 10 hours.

Dell will offer a keyboard case for the Venue 8 Pro and an attachable keyboard with an additional battery for the Venue 11 Pro. Both models also support an Active Stylus accessory, allowing them to be used in different ways when you're on the move and when you're sitting at a desk.
Comments