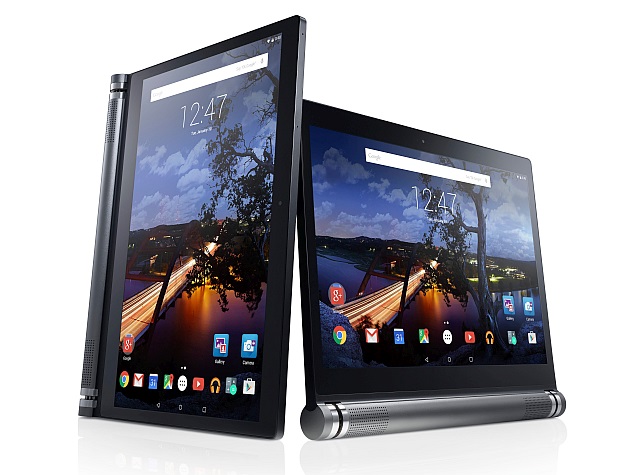 Dell has expanded its business tablet portfolio with the launch of the Venue 10 7000. The tablet will be available starting May in Canada, China, and the US. Availability outside these regions has not yet been announced.

The Android 5.0 Lollipop-based tablet sports a barrel-edge design which the company says makes it easier to "hold and carry", while also allowing users to use the tablet in five different configurations including tablet, slate, stand, tent or clamshell modes with the keyboard attached. The Dell Venue 10 7000 tablet also sports front-facing speakers. The tablet comes with Android for Work.

Notably, Dell's barrel edge design on the Venue 10 7000 tablet looks very similar to Lenovo's Yoga Tablet range; though Dell's design doesn't doubles up as a stand for the tablet without the keyboard.

The tablet is powered by a quad-core Intel Atom Z3580 processor coupled with 2GB of RAM. It features 10.5-inch OLED touchscreen with 2560x1600 pixels resolution. It sports an 8-megapixel RealSense depth camera from Intel, just like the Dell Venue 8 7000 Series tablet. It bears a 2-megapixel front camera, apart from 16GB of built-in storage. The Dell Venue 10 7000 tablet packs a huge 7000mAh battery and measures 598 grams.

Commenting on the launch, Neil Hand, vice president, Dell Tablet Group said, "Dell customers want more from their tablets. They want to be productive and get work done wherever they are, they want a great entertainment experience, and they want to carry something that turns heads. The Venue 10 7000 gives our customers all that and more: enhanced productivity with a full-sized keyboard and Android for Work, a brilliant display and innovative features like the Intel RealSense snapshot depth camera, all wrapped in a gorgeous design."

AMD Plans to Do for VR What It Did for PC Game Development
LG G4 to Sport 16-Megapixel Rear, 8-Megapixel Front-Facing Cameras