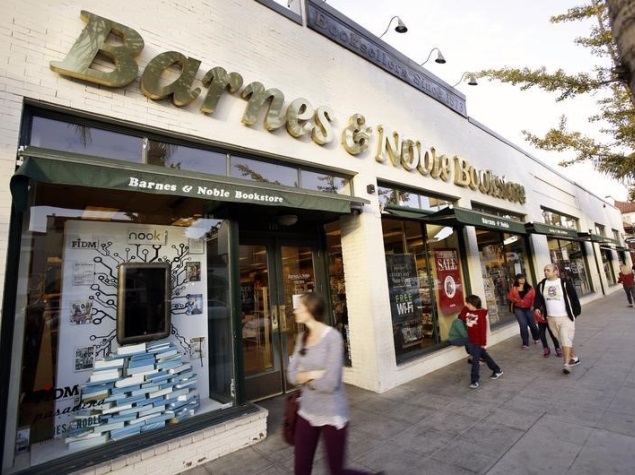 US book retailer Barnes & Noble said Wednesday it would spin off its Nook division, which produces tablets and digital books, amid ongoing losses at the unit.

The plan authorized by the board would separate the Nook unit by early 2015 and ends the effort by Barnes & Noble to directly challenge online giant Amazon.

B&N chief executive Michael Huseby said: "We have determined that these businesses will have the best chance of optimizing shareholder value if they are capitalized and operated separately."

The book retail operations and Nook Media "will continue to have long-term, successful business relationships with each other after separation," he said.

The company said it engaged Guggenheim Securities as financial advisors and Cravath, Swaine & Moore LLP as legal counsel for the spinoff.

The news came as Barnes & Noble announced a net loss of $36.7 million in its fiscal fourth quarter, narrowing the deficit from $114.8 million a year earlier. This was helped by a $12.5 million one-time tax benefit.

Revenues in the period increased 3.5 percent to $1.3 billion.

But the results were dragged down by weak performance in the Nook division, which saw a 22.2 percent drop in revenues and an operating loss of $56 million. That off-set improvements in the company's retail and university operations.

"We're pleased with our improved financial performance in fiscal 2014," Huseby said, noting that earnings before certain charges such as taxes and depreciation were the highest in four years.

Nook has failed to get a major foothold in a tablet market dominated by Apple, Samsung and Amazon.

Earlier this month, B&N said it would work with Samsung to produce a co-branded Nook tablet.