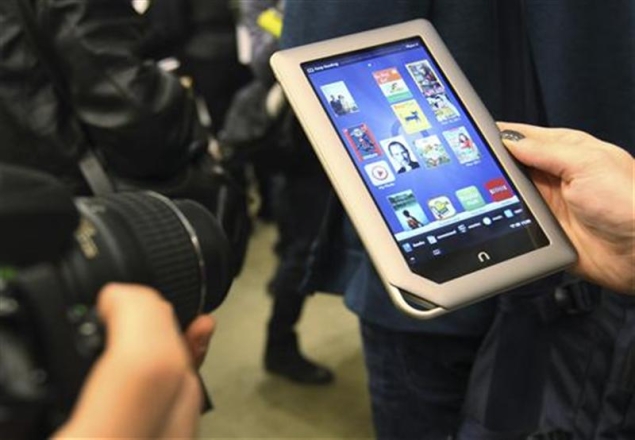 Struggling US book retailer Barnes & Noble said on Tuesday it was planning a new partnership for its Nook tablet computers in the face of ongoing losses at the division.

The Nook segment, which includes devices, digital content and accessories, posted an operating loss of $177 million in the past quarter, as sales of the tablet fell in an intensely competitive market.

"The company plans to significantly reduce losses in the Nook segment by limiting risks associated with manufacturing," a statement said.

"Going forward, the company intends to continue to design eReading devices and reading platforms, while creating a partnership model for manufacturing in the competitive color tablet market."

This will mean that its e-readers will continue to be developed in house, and the company's tablet line will be co-branded with a "yet to be announced third party manufacturers of consumer electronics products."

B&N "intends to continue to build its digital catalog, adding thousands of e-books every week, and launching new Nook apps."

The Nook has failed to make headway in a fast-growing tablet market dominated by the Apple line of iPads, and a handful of manufacturers using the Google Android operating system including Amazon's Kindle and Samsung's Galaxy Tab.

In 2012, Microsoft invested $300 million in the Nook division which makes the Nook tablet and e-reader which was split off from money-losing parent company.

Overall, B&N including its subsidiary units posted a quarterly loss of $118.6 million, on revenues of $1.3 billion. Shares in the company slid 17 percent to close at $15.61.
Comments