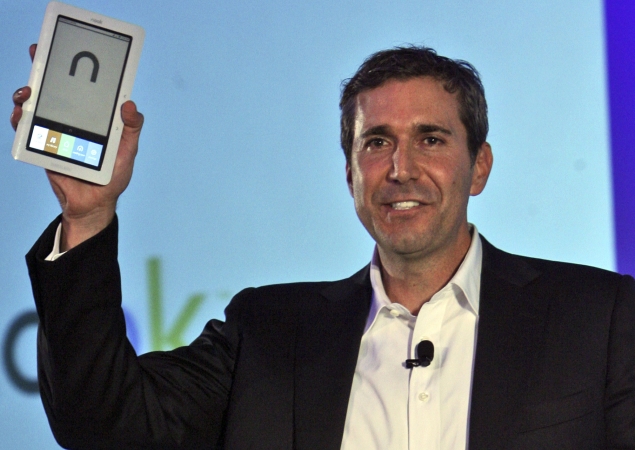 Barnes & Noble Inc CEO William Lynch resigned on Monday, an acknowledgement that its digital division Nook has failed to compete successfully in the e-reader and tablet markets and possibly presaging a further shake-up in the company.

Chairman and founder Leonard Riggio, the largest shareholder of Barnes & Noble, said the company is reviewing its strategic plan and announced a series of executive changes.

The new appointments suggest Riggio may be stepping up efforts to re-organize the company by separating the Nook business from the chain of hundreds of Barnes & Noble physical stores.

But with Microsoft Corp and Pearson Plc in the wings as minority stakeholders in Nook, it's not clear how this will be all be resolved, analysts said.

Signs that Barnes & Noble had come to a turning point with Nook came in the latest quarter, when it reported dismal results, led by a 34 percent drop in Nook sales. It also said it would stop making Nook tablets, marking the end of a costly attempt to compete with Amazon, Apple and Google in the tablet wars.

The operator of the largest chain of bookstores in the United States, has been hit hard by Amazon, which has won market share by selling physical books more cheaply online. Amazon, the world's largest Internet retailer, inflicted more damage when its Kindle e-reader became a hit and e-book sales took off about five years ago.

Borders, another big bookstore chain, went bust in 2011. But Barnes & Noble survived to challenge Amazon in the e-book market. Lynch became CEO about three years ago and led the development of the Nook e-book store, e-readers and tablets.

"Lynch was highly instrumental in making Nook a centerpiece in Barnes & Noble's broader operational strategy," Alan Rifkin, an analyst at Barclays, wrote in a note to investors on Monday.

"With this announcement, Barnes & Noble is, in our view, signaling that it is attempting to reduce its dependence upon the Nook."

The company did not name a new CEO but Chief Financial Officer Michael Huseby was named chief executive of the Nook Media unit and president of the parent company. Max Roberts, CEO of the company's education business, will report to Huseby. Huseby and Mitchell Klipper, CEO of the retail stores, will report to Riggio.

Shares in the Barnes & Noble fell 2.6 percent to $17.20 in after-market trading on Monday.

Minority interests
Last year, Microsoft acquired 17 percent of Nook in a deal that valued the unit at $1.7 billion. In December, British publisher Pearson bought a 5 percent stake in the business, valuing it at $1.8 billion.

Barnes & Noble shares surged more than 20 percent in May after technology website TechCrunch reported that Microsoft was considering an offer to buy the tablet and e-book parts of the Nook business. The stock has since given up those gains.

Meanwhile, Riggio said earlier this year that he wanted to buy Barnes & Noble's chain of nearly 700 namesake bookstores from the parent company.

"The next step is Chairman Leonard Riggio deciding if he's going to bid to buy the retail division and from that they'll then decide what to do with the Nook," Maxim Group analyst John Tinker said.

"Do they close it down? Do they reintegrate it back in the company? What happens to minority investors, Microsoft and Pearson? It all can be driven by the Chairman," he added.

The company is looking for a partner to make Nook color tablets under a "co-branding" agreement. It will continue to make black and white Nook e-readers and will still sell the tablets in its stores, she said.