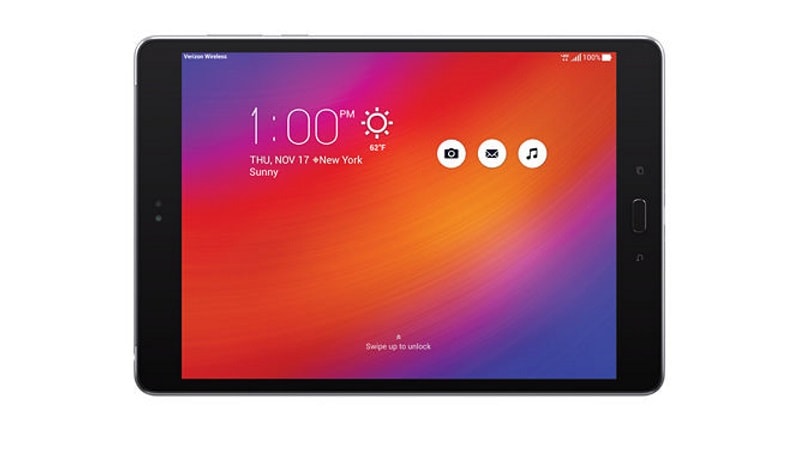 Asus has announced its 4G LTE Android tablet ZenPad Z10 for the US, which will be available in the country exclusively through telecom carrier Verizon. The tablet comes running Android 6.0.1 Marshmallow (with ZenUI) out of the box is already available through Verizon's website starting from $229.99 (roughly Rs. 15,400) but can be picked up from Verizon stores from October 13. There's no information if the tablet will be launched in other countries.

The Asus ZenPad 10 sports a 9.7-inch QXGA (2048x1536 pixels) IPS display and is powered by a hexa-core Qualcomm Snapdragon 650 SoC coupled with Adreno 510 GPU. The tablet packs 3GB of RAM. The tablet has an 8-megapixel rear camera and a 5-megapixel camera at the front.

ZenPad 10 has 32GB of inbuilt storage that is expandable via microSD (up to 128GB). The tablet houses a 7800mAh battery and comes with dual stereo speakers. In terms of connectivity, the tablet provides support for 4G LTE, Wi-Fi 802.11 ac, Bluetooth 4.1, and USB Type-C. The tablet is only available in Slate Grey colour option.

"Asus is excited to launch the ZenPad Z10, further expanding our relationship and product offerings with Verizon. The Asus ZenPad Z10 brings a premium and powerful tablet experience at a great price," Asus Corporate Vice President and General Manager for mobile communications Benson Lin was quoted as saying in a note by Verizon.

The company claims that the Asus VisualMaster technology in the tablet optimises contrast, sharpness, and motion clarity depending on the situation. It says that the tablet "automatically chooses the best settings for movie, gaming, and outdoor scenarios."