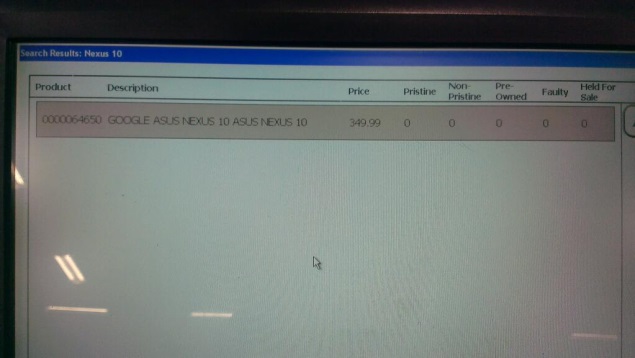 Coming amidst a volley of next-generation Nexus smartphone rumours, the first unverified details of the expected Nexus 10 tablet refresh have hit the Internet.

The leak comes from a PC World's inventory listing, clicked by an alleged PC World employee, @Rage06 notes the Android Police. The employee claims that Asus will be the official manufacturer of the upcoming Nexus 10 tablet.

Confirmed! New Nexus 10 will be made by @ASUS and will retail in the UK at £349.99 #Android pic.twitter.com/XyMvof4USr

The leaked image reveals a product listed dubbed the 'Asus Google Nexus 10,' and also suggests the retail price to be 349.99 UK Pounds (Rs. 35,800 approximately). Unfortunately, there is no word on the hardware or software specifications of the alleged tablet.

Meanwhile, multiple leaks have already purportedly revealed a lot about the alleged Nexus 5 or Nexus 4 successor smartphone. Earlier this week, the alleged Nexus 4 successor made an appearance in new leaked images and video. The device was also spotted at the FCC, where a new filing on the certification agency's website offered a full view of the mysterious Nexus smartphone that was first spotted in the Android KitKat statue video released by Google.