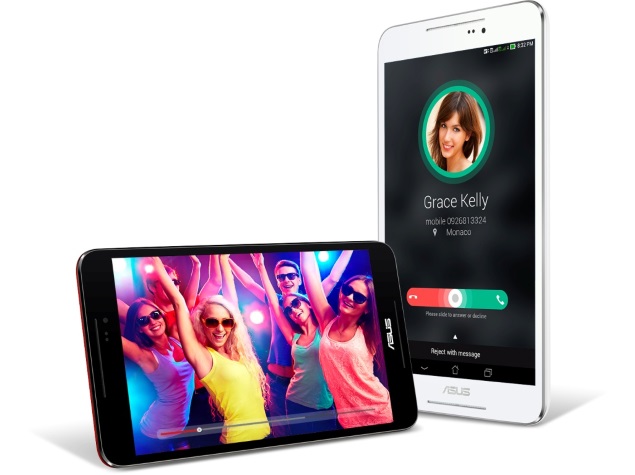 The Taiwanese company has not revealed availability details of the tablet; though it has confirmed that the Asus Fonepad 8 (FE380CG) will be exclusive to the company's own stores and Flipkart.

Initially announced at Computex 2014, the Fonepad 8 (FE380CG) is a refreshed version of the Fonepad 8 tablet and runs Android 4.4 KitKat out-of-the-box with the company's Asus ZenUI on top. The highlight of the tablet is that it supports voice-calling and 3G connectivity.

The dual-SIM supporting Fonepad 8 (FE380CG) features an 8-inch display with a resolution of 1280x800 pixels. Notably for the Fonepad 8, the company narrowed bezels to 5.06mm to provide a 72.2 percent screen-to-body ratio. The new 8-inch Asus Fonepad 8 (FE380CG) measures 12cm across.

It features the latest 64-bit Intel Atom Z3530 1.33GHz quad-core processor alongside 2GB of RAM. The Fonepad 8 (FE380CG) comes with 16GB of inbuilt storage and is further expandable via microSD card (up to 64GB).

It comes equipped with a 4000mAh battery that the company claims can deliver up to 12 hours of video playback or browsing the Web, or up to 21 hours of talk time.

Commenting on the launch, Peter Chang, Regional Head, South Asia and Country Manager, System Business Group, Asus India said, "Redefining the user experience of calling tablets category, we are elated to bring our 8 inch Fonepad 8 to the country. The device features next generation interface 'ASUS ZenUI' improves on your smart device experience, giving you a brand new user interface that features over 1,000 upgrades and enhancements over the standard Android operating system. Our Fonepad series have constantly introduced widely accepted innovation and all the necessary functionality; which has been loved by all our users. This encourages us to go beyond the regular and deliver incredible."