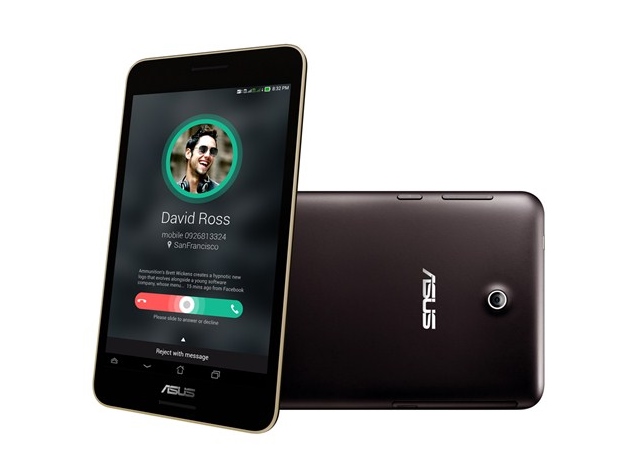 The Asus Fonepad 7 (FE375CL), listed on company's official website, will reportedly (via PhoneArena) be released in Taiwan first, for prices starting at around $250 (approximately Rs. 15,500). Global pricing and availability dates have not yet been disclosed.

According to the company listing, the single-SIM (Micro-SIM) Asus Fonepad 7 (FE375CL) features a 7-inch WXGA (1280x800 pixels) IPS LED-backlit display with up to 10-point multi-touch support.

It is powered by a quad-core Intel Atom Z3530 processor clocked at 1.3GHz alongside 2GB of RAM. There are 8GB or 16GB of inbuilt storage variants of the Asus Fonepad 7 (FE375CL), which also includes expandable storage via microSD card (up to 64GB).

Connectivity options of the tablet include 4G LTE, Wi-Fi 802.11 b/g/n, Bluetooth 4.0, GPS/ A-GPS, GLONASS, and Micro-USB. The Fonepad 7 (FE375CL) packs a 15Whr battery that is rated to deliver up to 12 hours of battery life - Asus claims to have measured this by looping an HD video with display brightness at 100nits, while keeping the external microphone, Wi-Fi and 3G turned on, and Gmail logged in for email and updates. The tablet has dimensions of 108.9x194.3x9.8mm and weighs 299 grams.