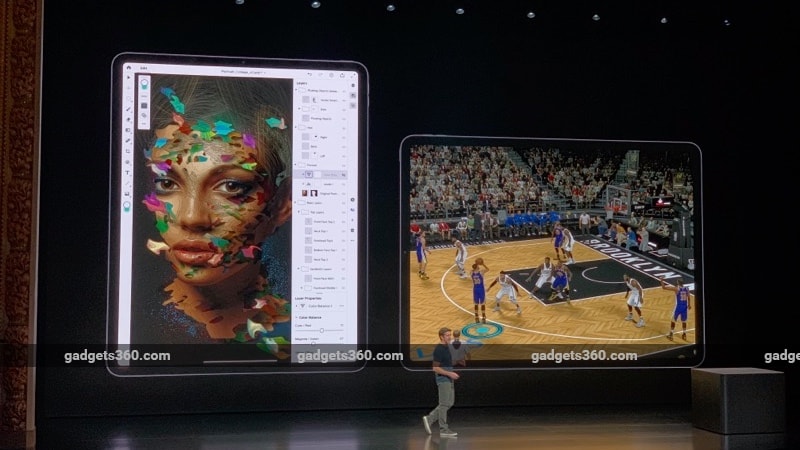 Apple's second big event of 2018 is being held in New York and it began at 7.30pm IST. Apple CEO Tim Cook took the stage at the Brooklyn Academy of Music after a video that praised New York. Cook teed off the event by talking about the Mac. He called it one of the world's most essential creative tools and showed a bunch of photos of creative ways in which people use the Mac, which included pictures of people sitting on glaciers, offices, and deserts while using MacBook laptops. He revealed that the Mac now has an active install base of 100 million. Cook first spoke about the MacBook Air, calling it the most beloved notebook ever. Apple announced that the MacBook Air is finally getting a high-resolution Retina Display. The device now has a 13.3-inch display and no aluminium bezels. There is a black border around the display but the glass extends to the edge of the screen, as it does in MacBook Pro laptops. There is a FaceTime HD camera on top of the screen.

The MacBook Air also has Touch ID fingerprint reader to unlock the device and to unlock third-party password managers such as 1Password. It has Apple's T2 chip for secure storage of files and data. The MacBook Air also supports the "Hey Siri" command to launch the voice assistant. The laptop uses a new keyboard with a backlight and a Force Touch trackpad with 20 percent more surface area. The device has a three-mic array for a better Group FaceTime experience. The device has two Thunderbolt 3.0 ports, which allows for charging, data transfer, HDMI outs, external displays, etc. The MacBook Air has an Intel 8th gen Core i5 processor with up to 16GB RAM and up to 1.5TB SSDs. It comes with the all-day battery life that MacBook Air is known for (12 hours of wireless Web browsing). The new MacBook Air has 17 percent less volume than the old one. The device is 15.6mm thick and has a headphone jack. The laptop weighs just 1.25kg. Apple also announced that every new MacBook Air is made from 100 percent recycled aluminium. The device will start at $1199, which makes it the most affordable Mac with a Retina display. This goes on sale today and it will be available from November 7.

Apple also announced an update to the Mac mini, a portable desktop computer that has long been ignored by the company. The Mac mini gets Intel's 8th generation processors with up to six cores. The Mac mini will have up to 64GB RAM. The device fits in the palm of your hand and ships with up to 2TB SSDs. The Mac mini has a gigabit Ethernet port and Thunderbolt 3 connectivity as well. The Mac mini starts at $799 and has 8GB RAM, 128GB storage. The Mac mini is available from November 7 and can be ordered starting today. Every Mac mini enclosure is made from 100 percent recycled aluminium, Apple said.

The iPad Pros are faster than the 92 percent of portable PCs sold in the last year, Apple said. The A12X Bionic offers 2X the graphics performance. The iPad Pro delivers Xbox One S class graphics performance, Apple said, while promising all-day battery life. It also has the neural engine for better on-device machine learning. The iPad Pro will offer up to 1TB of storage space and USB Type-C port instead of the Lightning port. This will allow you to connect the iPad to high-performance displays as well and you can even charge your iPhone with this device as Apple supports charging out with this iPad Pro. The Apple Pencil attaches to the iPad Pro magnetically and charges wirelessly too. It also supports new gestures such as tapping twice to switch between tools in the Notes app. It also has a new Smart Keyboard case. The cellular iPads will use e-SIM to connect to cellular networks.

Apple also announced iOS 12.1 that brings dual-SIM support to iPhone XS, XS Max, and XR. It also brings Group FaceTime calls to all iOS devices. This update will be available on October 30 at around 10.30pm IST, if previous iOS update times are anything to go by.

Apple will live stream the event on its website but this stream will most likely work only on Safari browser on iOS and Mac devices, and Microsoft Edge browser on Windows 10.